There you go ladies and gentlemen: The Amstel Gold Race Sportive.

Is it time we started comparing our exploits to those of the pros? Quite possibly. For the RVV and LBL we did the shorter, circa 150km-ish versions. For the AGR, the first of the Ardennes classics and the Netherlands' only entry on the spring cycling calendar, we'd taken the decision to go long. The full 9 yards. Or rather, the full 240,000 metres.

Ahem. But then you compare our time to that of the polished pros we saw gathering in Maastricht's Markt square the following day. 2017 winner, Philippe Gilbert, completed the course in 6:31 - that's having crashed midway and torn a kidney. Newfound respect for our broleurs in the pro peloton. 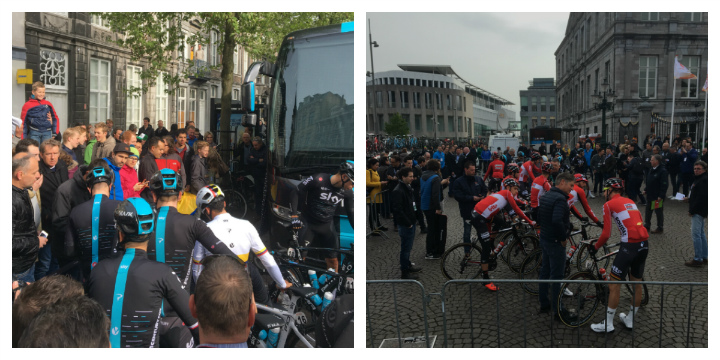 To be fair, we might have got closer to the six-hour mark, but the problem (besides weighing about 20kg more than Philippe and friends) was we didn't know how to pace the unprecedented distance. The furthest we'd ridden that year was just over half the full route. We were preoccupied with blowing up with a third of the sportive still to go. Who'd want to endure three hours of cramping, bonking, cycling hell? Not us. So the 'race' strategy was basically not to race. We would ride sensibly, drink regularly, feed well, and do our utmost to resist the irresistible urge to blast up the bergs and flog ourselves to hang on to the back of groups.

Because it's all about that pace

It started well enough. Awake before dawn, studiously mixing boiled water, porridge oats and mashed blackened banana in aluminium camping bowls and working our way through the BE41 hotel's stock of nespresso capsules. There was the good omen of a timely bowel evacuation. And a short and stress-free drive to nearby Valkenburg, where we were able to park conveniently close to the finish and assemble bikes without drama.

OK, so the descent down the Cauberg to the start line may have been a bit chilly, but it was early. Only light showers were forecast for the morning. A good test for newly purchased orange Orkaan jerseys. No point in layering unnecessarily. There was even time for a plastic cup or two of energy drink and what those youngsters call a "selfie" before crossing the timing mat together. Everything was going to plan. 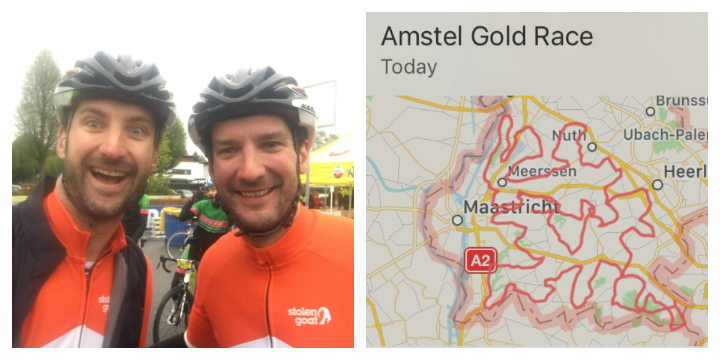 Mike Tyson once said: "Everyone has a plan until they get punched in the mouth".

In this case, that punch came in the form of a strange pre-cramp. The other brother and I both suffer and wonder if it's a genetic curse. It's like pain-infused concrete being injected intravenously into your limbs. Not so severe as to stop you pedalling, but enough to make you gasp for oxygen to feed agonised muscles.

There's a harrowing scene in the film Full Metal Jacket where the failing Private Pyle is pinned to his bunk by embittered platoon-mates and beaten with bars of soap entwined in towels. That's how my left thigh felt for the first 65km.

Honestly, I can't recall much else for the first three hours. Apart from it was cold. Cold and wet. Cold and wet and windy. Body temperatures dipped to just below unpleasant. There was nothing for it but to hunch shoulders, clench jaws, squint through rain-dotted specs and push on.

The other brother. I know I take the piss, but the truth is, there's nobody else who could endure the constant ribbing. That may be because most of the time, there's nobody else around. But boy is that man stoic. Short shorts. Fingerless gloves. One thin base layer and a jersey. On the front. Taking the wind. Turning those pedals. No griping or moaning. Just silent suffering. The faint creak of graft-worn bearings the only sound to be heard.

At the first feed station, I could hardly dismount the bike. Limping to the trestle tables, a sugar-crusted waffle was torn open by chattering teeth and greedily washed down with sweet orange drink dispensed by affable Dutchmen. Who are these people, these earth-bound angels, who spend the best part of a day halving bananas, tearing open boxes of golden gingerbread, and scattering jelly babies like jewels before us?

On another 60km. Smooth red cycle lanes. Intermittent hillocks. Buffeting wind bringing soft rain across grey skies. Cold cold hands. Round and round in spirograph circles on a course that resembles a poorly-conceived piece of Strava art.

The other brother's fingers were raw and swollen like a bunch of pink bananas. There was no point in him reaching round to his jersey pocket: he couldn't feel the difference between a Clif bar and an inner tube. Had we suffered a puncture there's no way we'd have had the strength in our hands to prise a tyre from its rim, or the dexterity to use a phone to call for assistance. It would have been a long, shivering wait for the broom wagon. 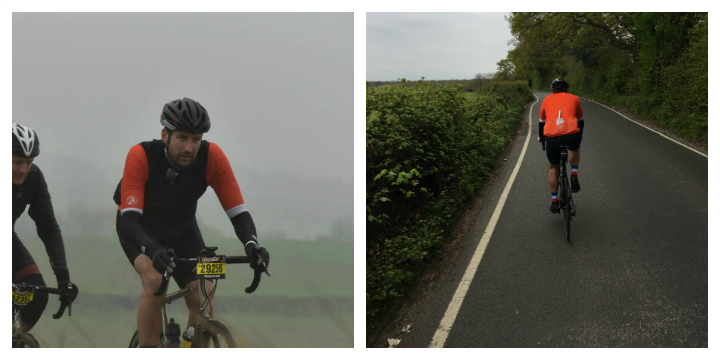 By the second feed station, the cramp had eased. Despite the incongruous latin beat of salsa music, there were few smiles and even less banter. Just grim nods of empathetic acknowledgement across the top of the pissoirs as thumbs fumbled to pull down the front of chilled black bib tights. Getting numb fingers back into gloves was like trying to push a piece of rope uphill.

Most of the 35 hills barely register as climbs and passed without comment or serious effort. The big ones strike in the last third of the Amstel Gold Race, when defences are depleted. At every one, the other brother was up and spinning away - yes, spinning - with an unfamiliar Froome-like cadence. It didn't help that my fingers were so numb I had to use my opposite hand to reach across and pull the levers to drop gears - but it would be churlish to use that as an excuse.

Up the exposed Fromberg accompanied by the wistful sound of a mobile disco, over the bleak Geulhemmerberg, around the bends of the unrelenting Camerig, which is the closest thing there is to an alpine-style ascent. At some point we entered Belgium and climbed a big hill through a pine forest with a playground at the top.

On to the soul-crushing Kruisberg, into the very tasty Eyserbosweg - a brute of a climb that ambushes you from behind a sharp right turn - and then we were slammed up against the thigh-burningly steep Keutenberg. Just one more to go.

The sky turned a slightly lighter shade of grey. The drizzle dissipated, but the sun was still too weak to punch through the cloud cover. A strange sensation: warmth. Warmth tinged with hope and mixed with a dash of relief.

There's a joyously long, velvety run down into Valkenburg. Descending, you're drawn by the sound of music that could only be emanating from a bar. Raucous roadside revellers gather at the foot of the Cauberg - the famous climb where previous years' pro races have been won and lost - drinking flagons of lager, urging on the soon-to-be-finishers.

Two brothers, utterly spent aside from some loose change, made one final push over the crest of the Cauberg, passed under la flamme rouge and did their very best impression of a sprint. A photo finish. We may have been separated by a rim's-width, a single sodden layer of lycra, we'll never know. Frankly, at that point we really didn't care. Somewhere, from a nearby marquee came the boom-boom of euro-pop and the scent of Amstel froth. We had chunky leaden medals around our necks, and a calling. 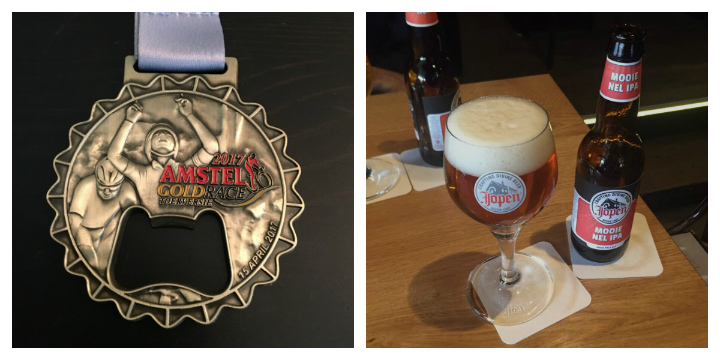 Somewhere in a parallel world, two brothers bowl along marble-smooth, sun-soaked lanes. Exchanging friendly chat with long-limbed Dutch rouleurs before bounding up the next berg. Hup-hup lowlanders! Chirping away as they cheerily take turns at the front, glad of the breeze that lifts honest sweat from beading brows up into blue blue skies. Bobbing in the saddle to the beat of the DJ at the top of the Fromberg they give a playful wink and thumbs-up to the cameras...

In an alternate reality, on another year, in another climate, with two extra layers of clothing the Amstel Gold Race could have been truly golden. Fortunately there's so much more to a foreign sportive or granfondo than the time on the bike. The AGR playlist on the drive over, laying new kit out the night before, ruddy-faced Dutch doing the conga around the beer-marquee, Limburg stew and that first swig of Jopen Mooie Nel IPA (sorry Amstel), basking in the glow of outdoor heaters in the bars encircling Maastricht's magnificent squares, watching the pro's glide by the following day. Memories that will endure long after the feeling returns to the tips of our still-numb fingertips. 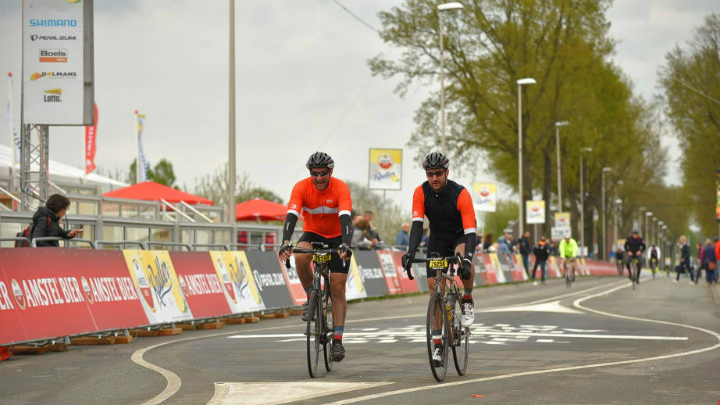 The idea of dropping down to the small ring, or granny gear as it's known, on all but the most heinous of climbs used to be abhorrent to me. A sign of weakness, an admission of defeat.

I'd stand up in the pedals and grind away in the big ring until either I wilted or the hill did. It was as if I was trying to prove something to any other riders around me - not that they'd have noticed.

It's fine to stay in the big ring if you're doing a shorter ride, chasing a Strava KOM, or crushing a flat sportive with just one or two climbs. But with 35 hills ahead, I realised I couldn't do my impression of Bernard Hinault.

In the build-up I began focusing on my cadence on a gym bike. First, going at 80rpm for half an hour in a relatively easy gear, then 90rpm, next 100rpm. I started to notice the difference on our weekly trips to the Kent Alps, Surrey Pyrenees and Sussex Dolomites. New PBs were set and the confidence flowed.

I resolved to switch to granny gear on every climb at the AGR and felt like I floated up most of them. The Kruisberg and Keutenberg were different - the 20% plus gradients demanding more effort. But for once, I arrived at the finish with enough gas still in the tank.

The moral of the story? Grannies are worth visiting every week, not just on special occasions.