Not many people do the Dragon Ride for fun. And you can take that as a compliment of the highest order. Tell people what you have planned for the weekend and very few respond with an "Oooh, that sounds nice."

At 223km with nearly 3,500m of ascending, it ranks among the elite of domestic sportives, tussling with the Fred Whitton Challenge for the title of the toughest. It rightly features on the British bucket lists of most amateurs, with a selection of climbs that compare more favourably than most with the cols of the Alps.

It's the kind of distance and profile that asks serious questions of any rider. The equivalent of the final interview round in The Apprentice. You've done all the frivolous challenges, concocting perfume for pets and selling jacuzzis to old people's homes. Now Nick Hewer is going to be sneering over his spectacles at your CV as you hope he doesn't spot that "sabbatical" you took during Euro 96.

South Wales could do with a few Alan Sugars. In fact it needs an entrepreneurial boost of Elon Musk proportions. Industry upped and left the towns of Neath, Port Talbot and Bridgend decades ago. Hard hats replaced with call centre headsets. It's not easy to imagine prosperous times ahead. 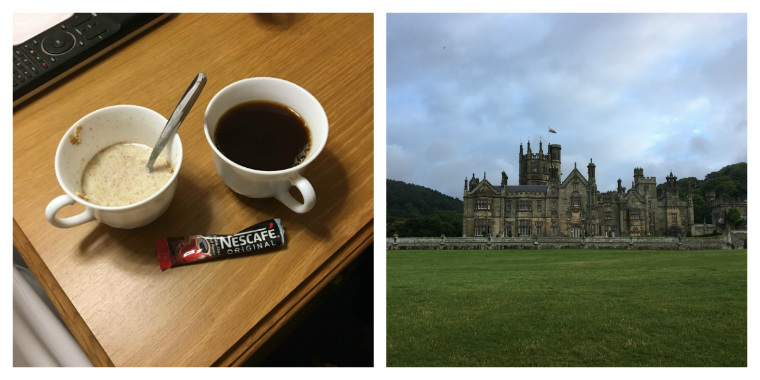 Contrast the rows of squat terraces with the gothic grandeur of Margam Park, start and finish line for the Dragon Ride. A suitably splendid setting, a Downton Abbey among lush valleys. Having started the day with a thin Nescafé coffee and three cups of Alpen eaten with a teaspoon, I owe a world of thanks to the kindly Samaritan who stood me a double espresso when my card wouldn't pass muster at the cash-only coffee cart.

For every valley there's a peak

Majestic. The Dragon Ride is defined by its sharp teeth. After an easy 30km or so comes Blwych (I still don't know how to pronounce it - maybe like a belch with your mouth closed) and shortly after, Rhigos. Steady five percenters that generously permit you to find your rhythm and tap it out without interruption. And following the metronomic ascent, you're rewarded with a blissfully smooth luge-like slide down the other side.

The Devil's Elbow affords you no such pleasures. It's an agricultural toil, angular and objectionable. Although the sight of the famous devil man hopping up and down above the sharpest of the bends offered some distraction. Once over the summit the only reward was a buffeting wind, like a slap to the face for doing the dishes. 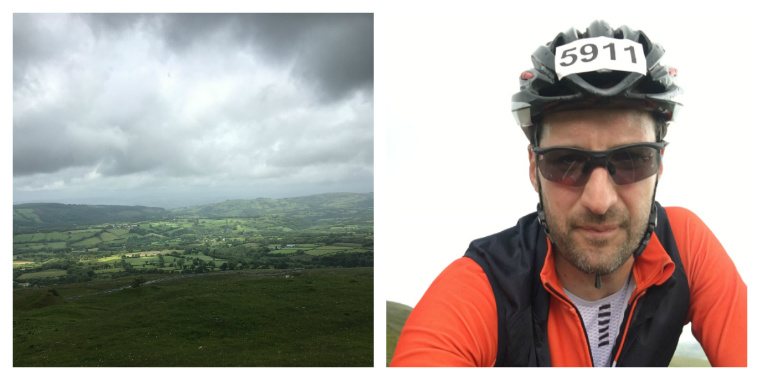 The other brother once quipped that it's wise to avoid any climb that sounds like it belongs on a pirate's treasure map. By the time we reached Black Mountain, the legs were leaden and resentful, but responded admirably as if stung into action by the flick of a riding crop. At the peak there's a car park with a van selling ice cream. It might have been tempting if there had been even a glimmer of sunshine, but Black Mountain has a dark reputation to safeguard. Slate-grey cloud, gale-force wind and stinging hailstones combined to banish any dreams of a Mr Whippy.

After this there's only Cimla, a nasty suburban bite in the butt for anyone who has the temerity to think they're home and dry. Impatient drivers adding to the unpleasantness.

Between these fearsome peaks lie verdant valleys and the bleak expanses of the Brecon Beacons. There's every kind of terrain and a good chance you'll get a taste of all four seasons along the way.

A daunting distance without the usual companionship of mon Broleur. He acts as a virtual stem sticker, with full audio climb commentary and regular feedstop countdowns. In his absence I resolved to chat away to anyone who'd respond and whiled away some pleasant miles in the easy company of strangers. It always helps to have people's names above/below/aside their bib numbers - a national flag even better.

But for long lonely periods it was just me, Stan the stem and Garry Garmin checking off the milestones... we struck up quite a rapport.

85km - a typical winter ride and a third of the way
100km - the metric century, always satisfying and well under 4 hours
125km - a good summer ride and past halfway
160km - the imperial century and over two-thirds there
200km - double metric, 8 hours in the saddle and time to flog the legs

With every passing marker I drew some cheer by calculating the distance remaining for the plucky but unlucky riders who had opted to do the 300km Dragon Devil. The Germans call it schadenfreude, not sure about the Welsh - but I bet it's harder to pronounce.

We only came for the potatoes

Broleurs like a feed. And a drink. Where others carb-load, we carb-gorge. And what have those other food groups done to warrant such neglect? We're with Gordon Gecko: greed is good. 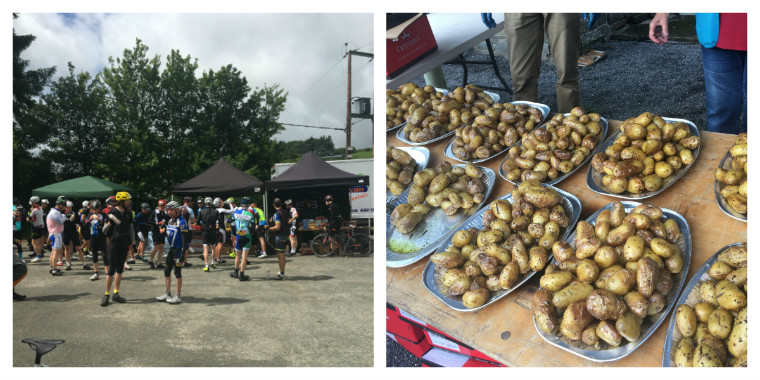 Bless the cheery souls who take such pride in dishing up the wondrous savoury fare for which the Dragon Ride is justly famous. Standing under rain burdened canopies for hours serving up a four course feast. Patiently pouring energy drinks and thrusting snacks into grabby hands.

Cold roast new potatoes with rosemary and a desperate dunking of sea salt.
Soreen malt loaf (or did I dream that?)
Bidon refill of finest isotonic sports drink.

Duo of half a Mars Bar and half a Snickers.
Jersey pocketful of sugar-dusted jelly babies.

A cold pint of lager at the finish (gratuito). 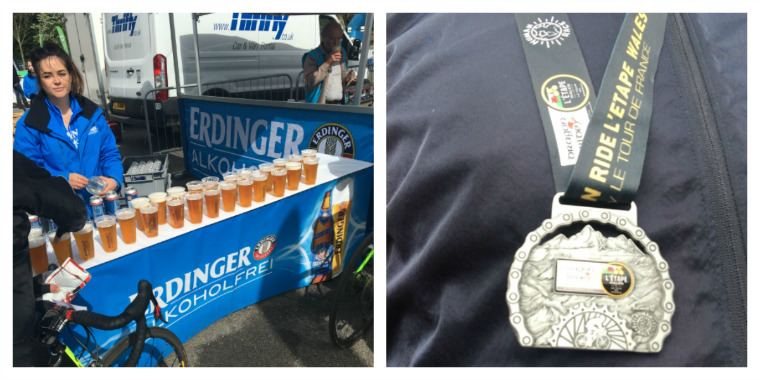 The Dragon Ride is fully deserving of its place in cycling folklore. A mythical beast slain by gallant heroes riding steel (OK, carbon) horses, and duly rewarded with a legendary feast. It truly is the stuff of legend.

If you've served your cycling apprenticeship in the gently rolling dales, the hillocks of the home counties or the flatlands of the fens, and you're ready to make the leap from humble squire to knight of the cycling realm, gird your loins and sign up for the quest of a lifetime.

Curmudgeon that I am, I don't like surprises. I'm the sort of 'saddo' that looks up a movie ending before I watch it at the cinema; I'll read the last chapter of a book I'm only halfway through. I guess I want to know - and be reassured - that everything will be all right in the end.

My old school rugby coach had a mantra: To fail to prepare is to prepare to fail. So when it comes to long Sunday rides and sportives, I make sure I always do my research and bone up about the various climbs.

When I should be working, I'll seize any spare moment to pore over Veloviewer, Strava and YouTube videos. Where are the steepest parts of the climb? What's the max gradient and how long does it last for? Where are the easier sections? Where are the riders getting out of the saddle? Where are they flagging and weaving across the road? What's a good time to aim for?

I then build up a map in my head of the climb, where I should push and where I should ease off to settle into a steady rhythm. It ties in perfectly with my obsessive nature.

What I've found, though, is that while all this background information is very useful - usually in helping my brother drift off to sleep as I drone on - you can't prepare for conditions (both road and weather) and how you and your legs will feel on the day.