Actually Day 112. More than a hundred days since the commitment was made at a Boxing Day family gathering. That's an awful lot of anticipation.

Trusty steeds had to be purchased. Mine a 40th birthday titanium indulgence, the other brother's a carbon-framed bike-to-work bargain. We'd chugged around Richmond Park many times over and huffed and puffed up the Surrey hills, gradually improving our times and dropping a pound or two in the process. Almost as much effort went into choosing race day kit.

On the long-awaited day, gleaming bikes were eased down from roofracks and carried like precious metal across the glass-strewn grit of the Peruvian Wharf car park. Overnight bags were tagged and gently tossed into the backs of the westward-bound lorries. Legs were stretched and specially-procured matching Brooklyn Brewery jerseys and caps revealed.

No fanfare. A staggered, slightly inauspicious start, given the protracted build-up. But it certainly didn't dampen the enthusiasm for the odyssey ahead.

Out beyond the shadows of Canary Wharf along eerily quiet A roads and a lot of abandoned roundabouts towards the greenery of Epping Forest. So satisfying to be out after 112 days training and waiting. New views, blue skies, pedals silently turning freshly-oiled chains, chalking off the miles. Everything felt right.

The ectasy and the agony

But then something was wrong, very wrong. A faint ache behind the kneecaps gradually intensified until it became excruciating. Thirty miles in and I was questioning if I'd make it to the first feed station, never mind Windsor over seventy miles to the West. All I can recall is pain. I'd like to think I was stoic and uncomplaining, most probably not.

At the first stop, I begged ibuprofen and a kindly medic-type-person bound my knees to lift the kneecaps. It at least numbed the pain and I was able to keep the pedals turning. The lesson: when you buy a new bike and they very generously offer to have you back so they can give you a proper fitting (free), take up the offer. 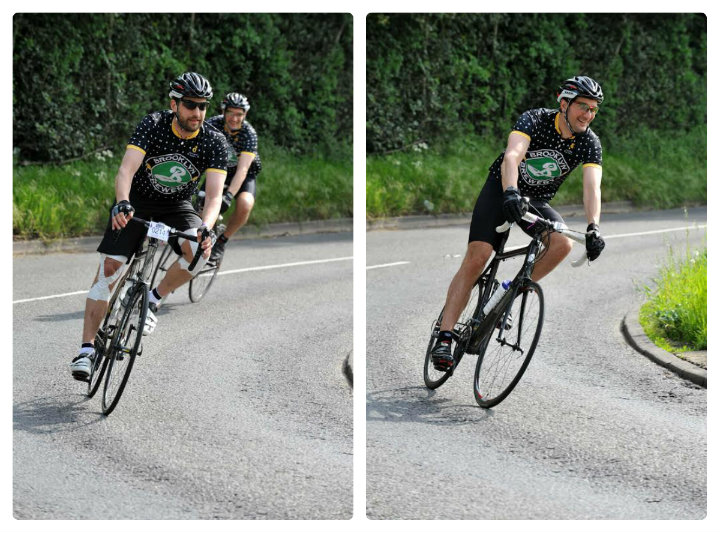 The route of the Revolution arcs over the top of London and out towards the Chilterns. A few hillocks came and were duly dispatched, nothing too strenuous. At the second stop, many riders took advantage of the leafy school grounds and sprawled out on the lawns. We focused on feeding and didn't risk settling in case the knees seized.

Windsor racecourse was a most welcome sight after a hundred miles. One proud mother and the other brother's soigneur had made the trip to greet us and we basked in the sunshine and the glory.

The team behind the Revolution had thought everything through. The bikes were safely stowed. Music played in tents serving beer. Seeing the other brother attempt some yoga-style stretching floor work was worth the entrance fee alone. I'd have paid even more for the wonders of the free acupuncture I managed to get done on my knee. Transformative.

The tents were neatly pitched and our bags easily retrieved. Queueing for a turn in a portable shower could have been awful, but they were wonderfully worth the wait. Clean, hot and strong. There were plenty of options for extra food, beer on tap, and a great sense of camaraderie between the 800 or so riders sleeping out. And sleep we did.

Day Two, the other brother

Not only was the London Revolution our first sportive, it was to date the only two-day event we've attempted. We'd jumped straight in at the deep end and it was sink-or-swim time.

If Day One was defined by distance, Day Two was all about conquering climbs. Box Hill and its Zig Zag Road might as well have been rechristened Alpe d'Huez as far as we were concerned.

It dominated the conversation among the peloton propping up the bar on Saturday night and pervaded my thoughts throughout a restless night in the tent, before I gave in to the voices in my head and got up at the crack of dawn.

But Box Hill would have to wait. First things first, I had to check on the mummified remains of the bandaged brother. Would he be fit enough to ride? Would his knees hold up to another 90-mile pounding? Would I have to, heaven forbid, go it alone?

Deep down, I knew there would be no way he would quit. We'd paid good money for fancy bikes, told too many people we were entering, suffered too many blue fingers and toes from our winter training in Richmond Park, for him to give up our quest.

But the other brother's predicament got me thinking (dangerous, I know): if gritting your teeth through the pain is sometimes necessary, what else is required for first-timers to give a good account of themselves at the Revolution or, come to that, any sportive?

1. Eat, drink and be merry. There's no excuse for anyone 'bonking' on the Revolution. When it comes to feed stations, it is still ranked No1 on Broleur's all-time list, the standard-bearer for other sportives.

As we were looking to complete rather than compete, Bunteur took his own sweet time at the buffet table. Chicken and stuffing sandwiches were the undoubted highlight but I also recall devouring a chocolate wafer sandwiched between two chocolate digestives. I tasted the future. And remember, with all those calories you're burning, it's guilt-free eating, so get involved.

2. Don't let doubts creep in. In any sportive, there almost always comes a point where you question your ability and/or sanity. The dark cloud of despair usually descends around the mid-point of a ride or while going up a gratuitously steep hill.

At these times it's worth remembering the words of cycling legend Jens Voigt: "Pain is temporary." It will end, the summit will be reached, the sportive will eventually finish.

It's remarkable how quickly those painful memories are replaced by recollections of glory and a sense of achievement once you've crossed that finish line.

3. Let the draft in. We didn't really appreciate the benefits of drafting until La Ronde Picarde.

If you can, latch on to a group of riders who are going slightly faster than you would on a Sunday outing and then enjoy the feeling of being pulled along while putting in minimal effort. Not only does it conserve energy, it's a real buzz to bond with other broleurs and you'll probably add 5-10kmh to your speed.

Just don't forget to do your stint at the front - no one likes a work-shy wheel sucker. Keep your cadence and speed steady. Resist the urge to suddenly ratchet up the pace a la Doug Johnson and detonate the group.

Get back in your Box

The highlight reel of the second day certainly featured the iconic Box Hill. Expecting a horror show, it turned out to be more Monsters Inc. than Nightmare on Elm Street. The Freddy Krueger of the parcours proved to be Surrey's Gangers Hill, with its tortuous 20% middle section. One-two, it's coming for you...

There was the thrill of doing a few laps of Herne Hill Velodrome in front of our adoring fans/very bored family who had been waiting more than an hour for us to eventually rock up. 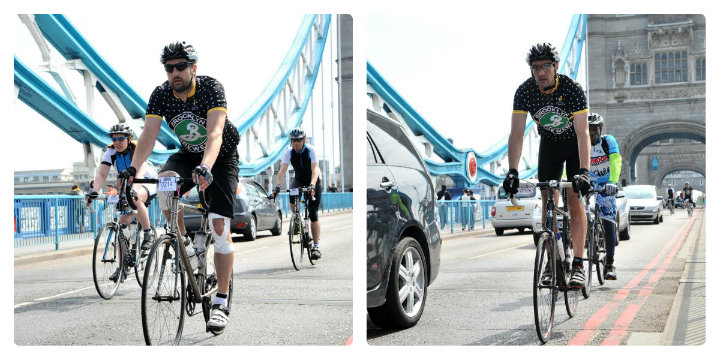 Then there were those final glorious few kilometres once we'd passed over Tower Bridge, knowing we'd achieved something that a few months previously had appeared nigh-on impossible. You couldn't wipe the smiles off our faces as the end approached.

This wasn't a moment to sprint for the finish. It had to be savoured. Arm in arm, we crossed the line as we'd started: together. Our journey had begun.

Make no mistake, Broleur are most definitely 'roadies'. Give us a stretch of smooth-as-marble tarmac over a rutted, boggy, boulder-strewn country trail any day of the week. Mountain-bikers and MTB