February doesn’t have much going for it. It’s invariably dark, cold, wet and depressing, the dubious smudge in the calendar’s underpants. There’s the occasional leap year to spice things up a bit but otherwise it’s just all a bit blah.

So, to sprinkle a little glitter on the February turd, we signed up to take on the Hell of the Ashdown. Not only would the HOTA be a good test of our early-season mettle with 11 ‘cols’ over its 107km parcours, but it also tied in nicely with the fact we’ll be doing the ‘Hell of the North’, Paris Roubaix, in April. We’ll be spending a lot of time in the Lycra Lucifer’s company this year.

There was the added attraction of the Hell of the Ashdown being on home turf, our manor. With familiar roads and climbs from our top 10 lists in Kent and Sussex, there wouldn’t be any nasty surprises but also no excuses for not putting in a competitive time.

To that end, we enlisted the help of Paul ‘Tiptronic’ Tippett, the star of the Broleur CC show at Revolve24 and Tour of the Surrey Hills. We were counting on him being the one to set a relentless pace on the front and drag us along. 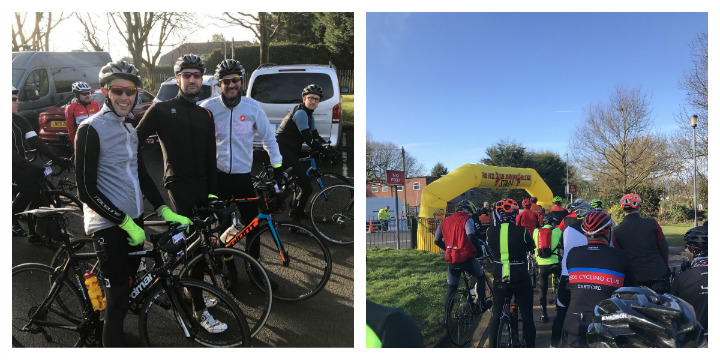 But, having confidently led out our cohort of riders after a delayed start from Charles Darwin School and negotiating the first of the cols - Cudham Test Hill - disaster struck. With Paul surging onwards and upwards, I tried to match him by unleashing a wattage bomb of my own – but it unfortunately blew up in my face. The moment I dropped the hammer, there was the foreboding and ugly grinding sound of a chain coming loose and jamming the pedals. I hit the deck. Hard. Not so much kissing the Tarmac as giving it a passionate snog.

Luckily, I wasn’t going downhill so there was no lasting damage to either body or bike. But with a nasty case of road rash, blood seeping through my jersey and 104km still to go, it seemed a dauntingly long way to the finish.

If I’d been riding solo and/or the weather had been grim, I’d have probably disconsolately taken my bat and ball home, but the presence of the other brother and Paul made me clamber back on the bike. Gut check time. 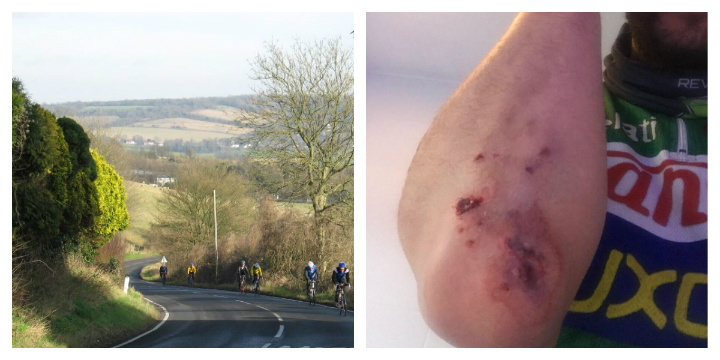 The adrenaline carried me through the next 30km or so at a decent lick, including the easier - but by no means easy - face of Toys Hill. The sight of the other brother coasting past with his forearms casually resting on the handlebars was confirmation he was in great shape. I couldn’t let the side down.

But once that blissful mixture of adrenaline and Nurofen started to wear off, the back began to seize up and the pain emanating from hip and elbow went from a barely audible whisper to a full-blown toddler’s tantrum.

I was struggling, dropping off the back of the other brother, Paul and a bloke who had politely asked to board our train, Andy from Yorkshire.

So when the bro called out he had a flat, it was a relief rather than an annoyance. Yes, it would be mean a 10-minute pit-stop, but we all needed a bit of R&R and it cemented our decision to bypass the feed stations. For those of you who are thinking about doing the HOTA in the future, pack plenty of spare inner tubes. The back roads of Kent and Sussex, while offering some beautifully scenic views, haven’t seen a lot of love in a long time and large potholes are a recurring theme and constant menace. 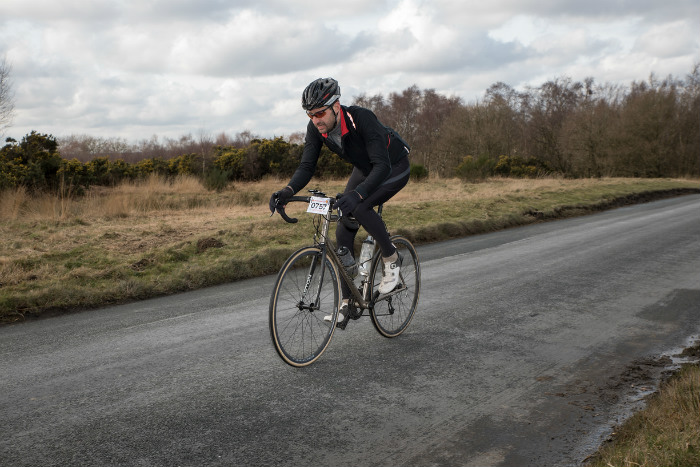 The organisers, Catford CC, did their utmost beforehand by emailing the riders to warn them of the location of the open-cast mines. The marshals were also top notch, offering some much-needed encouragement and guidance after angry locals had removed the arrow signs around Hever Castle. I can't imagine there would have been too much disruption to the residents of Kent that early on a Sunday morning, but that's a rant for another time.

There was even a broom wagon thanks to the cycling tour company La Vie en Velo with the boss Angus, affable chap that he is, personally doling out 20kg of homemade flapjacks to the riders before the start.

You’ve got to be kidding me

The plan had always been to go full gas for the first few hills, then hang on for grim death in the last couple - Hubbard's and Hogtrough.

Markbeech, Cowden, Wych Cross and Twyford Lane had all been dispatched with the minimum of fuss but then we had to scale ‘The Wall’, Kidd’s Hill, and hope we wouldn’t suffer too many casualties before the final assault. I could feel my thighs and hamstrings start to tighten - a flashing red warning light to me where cramp is concerned - but wanted to give it everything and suffer for it later. I'd already held up the other two on several occasions (is there anything worse than seeing your team-mates forced to wait for you at the side of the road?) and had enough of the well-intentioned 'Are you OK?' questions.

To be honest, Kidd’s wasn’t as bad as I remembered. But somewhere in the dark cycling recesses of my brain, I knew it was a Faustian agreement. I’d made my pact with the Devil and he'd soon come calling for what he was owed - and there was nothing I could do about it. 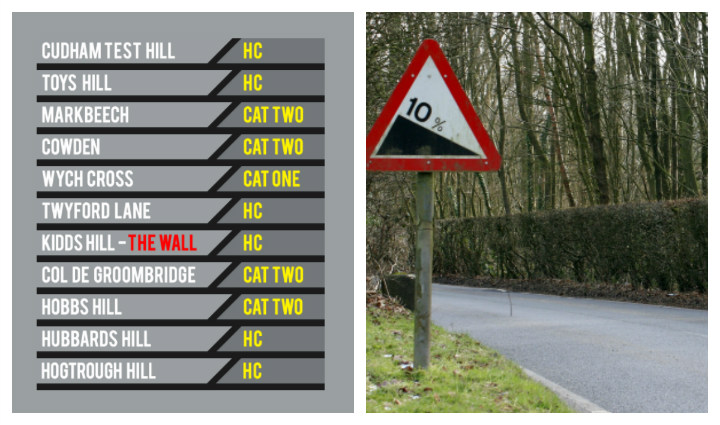 By the time we reached Hubbard's - after Groombridge and Hobbs Hill – I knew I was in trouble. Cramp in the groin had really kicked in - an unfortunate legacy of having 2cm cut away (off the groin muscle, just to be clear) in an operation a few years ago to fix a fractured pelvis, which has left me very susceptible to it. It wasn’t Galibier bad but was still deeply, get-off-the-bike unpleasant. I’d tried stretching beforehand so if anyone has any cure-all suggestions, answers on the back of a postcard please.

I was on fumes by this stage but, fuelled by the other brother's exhortations, I emptied the tank to reach the top. Only one more to go...

What a load of Hog wash

Hogtrough Hill. With its 20% gradient, it's bad enough without 100km in the legs, cramp and road rash. I thought I'd let the other brother and Paul go ahead and smash it. Then I'd furtively get off the bike, walk up it, get back on just before the summit and see them at the junction with The Nower, with an obligatory blow-out of the cheeks and perhaps a shake of the head to show I'd given my last drop. Tee-hee, they'd be none the wiser...

No such luck. There they were at the base, off Pilgrims Way, egging me on. Bar stewards. Nowhere to hide now. What followed was an execrably long crawl to the top in granny gear. Cycling in wet concrete. The other brother duly zoomed past me near the top, but where was the metronomic 'Tiptronic'?

The one crumb of comfort was that he'd been stricken by cramp on the way up, forcing him to get off. Misery does indeed love company.

From there, it was just 2km to the finish, with the somewhat gratuitous Berry Hill thrown in to polish off the legs. But with family waiting to rally us on the finishing straight past the Old Jail pub, quitting was out of the question. I even managed to raise a cheer so that my daughter wouldn't fret about my bloodied arm.

The line was crossed with head bowed rather than a triumphant punch in the air. Like the HOTA's arch, I was feeling a bit deflated – with a sense of 'coulda, woulda, shoulda'.

But that sense of disappointment only lasted the couple of minutes it took to freewheel back down to the pub. Nursing my war wounds - while at the same time trying to show them off - with two pints of ale (one for pain, one for pleasure), the chat soon got round to just what an excellent sportive the HOTA is, especially coming so early in the season.

Long enough to exhaust the legs but short enough where the end is always in sight; testing enough over the 11 cols without ever feeling like you're going to fail the exam; some gorgeous scenery and some gritty roads; well marshalled, well run and well hard after a crash. The HOTA is definitely more heavenly than hellish.

How hard did you train over the winter? Get out on the road to put in the winter miles in anticipation of summer smiles? Or did you hibernate in the pain cave, getting your HIIT on Zwift with virtual friends? Either way there comes that point early in the year when you've got to get out there and show the world what you've got.

Often times it's as uncomfortable as seeing the reflection of your glistening pate under the harsh flourescent glare of a changing-room light as you try to squeeze into a pair of jeans too skinny for your age. That waist size is in inches, not centimetres, right?

Everyone at the start line looks fitter and faster. Playing rugby as a kid, the opposing team warming up at the other end of the pitch always looked a head taller. Surely they're the under 15s? Nope - and see that guy over on the left that's built like a prop? He's their winger. And he came second in the 100m nationals last year.

But thankfully lycra's more pliant than selvage denim. And nine times out of ten it turned out that winger couldn't catch the ball. So the ride begins and damn those real hills are tougher than that fricking volcano, but it's just so good to be out. The season has started. Game on.

No one can claim the London bergs rival the peaks of Europe. But put a stint in up London's steepest hills and you'll find yourself languishing on Lactic Acid Lane rather than cruising up Easy Street. 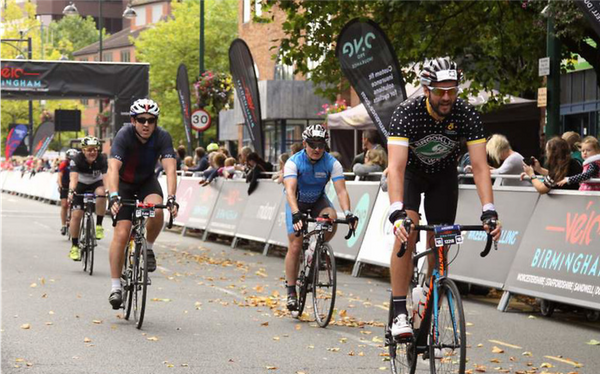 Velo Birmingham is one of the few closed-road sportives in the UK - and given the number of local complaints, there may not be too many more. Shame, because the ride - and the support - did the midlands proud.