Here's a short list of the things I look for in a cycle ride. A road trip, foreign climes, views of Alpine vistas, conquering a famous climb or two, gourmet delights washed down by a slug of Belgian beer or French wine. So when the other brother first suggested Revolve24, I wasn't sold. Boring old Kent, endless laps around the same route, no views, no peaks, no booze, no sleep. No interest whatsoever.

He wasn't to be deterred. A rallying post went up on the Broleur CC Strava club and voila, we had a team. Or rather, a bunch of strangers whose only connection was liking a blog and riding a bike. Nevertheless, les jeux sont faits, as they say in France. I felt obliged to participate. A conscientious objector, voluntarily conscripted.

Still, there could always be an out. Perhaps a mega-mechanical, an inopportune work trip, a family crisis or the timely recurrence of an episodic crippling back spasm. No such luck. The news that one member of our team, Nigel, had been struck down with illness the night before was met with envy rather than pity. Our team of six had already been winnowed to five, only a complete shitweasel would reduce it further to four.

A lot of random stuff was thrown into the car on the Saturday morning without a lot of forethought. Registration at Brands Hatch closed at 2.30pm. I registered at 2.29pm exactly and made my way through the tunnel under the track to join Broleur CC in the pit lane.

Each team is allocated a pit garage and some had really gone to town. Bunting, bean bags, trestle tables laden with food, bike stands, turbo trainers and air mattresses. Ours looked a little sorry by comparison. Five bikes, three sleeping bags, two camping chairs, one bedroll, a stand pump and a camping stove we weren't permitted to use. 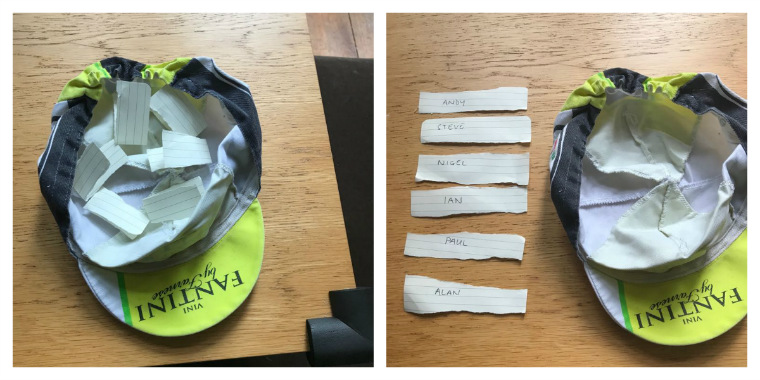 Marginally more thought had gone into our race strategy. Well, we'd drawn names out of a hat. Ian the debutant was to lead us out, Paul 'tiptronic' Tippett following, then yours truly, the bro, and finally Alan, our veteran power lifter would be powering us home.

Beginning 51st on the grid, the other brother held Ian's bike for the ceremonial start. On the starting signal Ian sprinted (sprant?) across the track, mounted, clipped in and applied the power to get on the back of the opening bunch sprint. Imagine a tightly wound Evel Kneivel tearing up the living room carpet. It was impossible not to feel a tingle of anticipation. 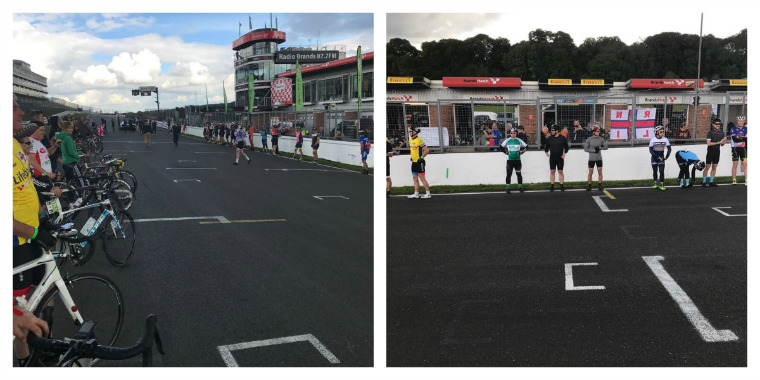 Four laps each was the plan. With the circuit measuring approximately 4 kilometres and being covered at average speeds upwards of 30kph, that gave us around thirty minutes on the bike followed by two hours between turns to cool off, change, refuel, warm up and get into position on the pit lane for the changeover: the largely symbolic passing of a luminescent green wrist band.

The track is nice and smooth, as you might expect from a motor-racing circuit. More sanded floorboard than marble counter top, but you'd have to be desperately unlucky to catch a flat (some were). Climbing out of the pit lane, there's only a hundred metres before the first corner. A dip downwards and then up the official event KOM climb towards Druids corner. Back downhill towards the fastest bend and into a headwind behind the pit garages and food trucks. Up another punchy climb and into a featureless hinterland distinguished only by a draggy false flat. Under a bridge, around a final bend and into the home straight.

Four laps fly by. The occasion, competition and support all combine to drive you onwards. It's a buzz, there's no denying it. Whether that buzz endures for the soloists grinding their way around the track for 24 hours, I'm not so sure, but as part of a team it's pleasantly electrifying. So much so, it takes a while for the adrenalin to subside and the body to cool after a stint.

It feels good to strip down and climb into soft, warm leisurewear. Even better to gorge on the fine fare on offer. Trucks offering wood-fired pizza, pulled pork rolls, syrupy belgian waffles and espressi were all doing great trade. I'd imagined a lot of time spent watching the iPhone clock and idly scrolling through social media feeds. Not so. Between recovery, preparation, and checking in on team mates' progress, the time passed swiftly and pleasurably. 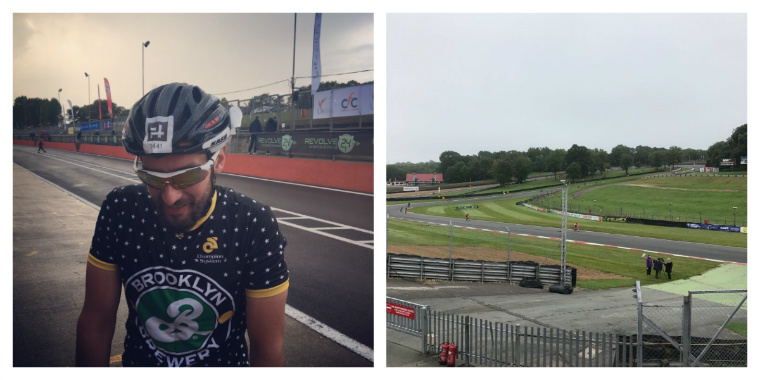 Afternoon became evening. White cloud turned grey and specks of rain pre-empted a downpour as the other brother took the baton for his seven o'clock shift. It lifted as he rolled back in, sodden, proving categorically that he is indeed the weather curse. And then it was nightfall. The enormity of the endeavour began to sink in. 16 hours and a long way to go.

We switched to six-lap efforts, increasing the time on the track to around 45 minutes and the breaks to three hours. Setting out from the harsh fluorescent light of the pit garage into the black beyond, you felt like Oates exiting the tent: "I am just going outside and may be some time". 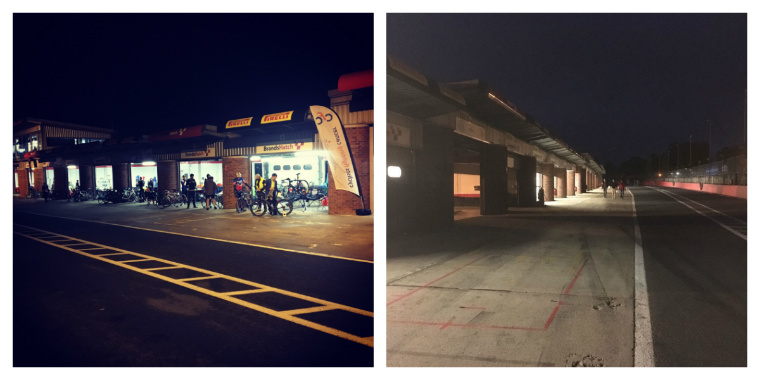 Sleep-starved eyes played tricks in the darkness. The little red dots of the riders ahead simultaneously appeared to be closing in and pulling away. Returning, spent, to the desolate pit lane, the few people still standing looked shivery and drawn, hollow eye sockets underscored with dark rings. Many had migrated to the warmth of the media centre, others hibernated in sleeping bags with eye masks and ear plugs. 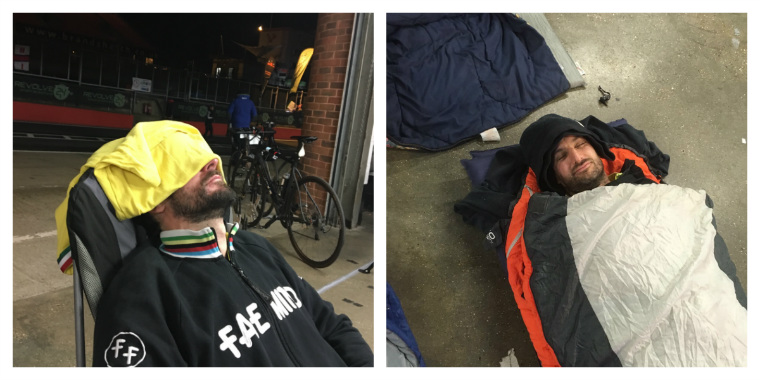 The 3.30am shift heralded the orange glow of the pre-dawn, followed by a chilled, damp blanket of early-morning fog. Rumours spread that the event was going to be cancelled or temporarily paused. But the race went on. We rode on into daylight and the blessings of strong coffee, comforting porridge and hot bacon rolls.

We entered with no plan, never mind a plan to compete, but what else is there to do in a competition? The latest lap times and league tables were there just waiting to be refreshed. As the sun rose, it dawned on us we were placed fifth among the 22 six-rider teams, and not far off third. We'd gain a couple of seconds on one lap, only to lose them the next. It all got a bit more serious. Now we were early into the pit lane, waiting for the handover. Pep talks were delivered, shoulders rubbed, backs slapped and roars of encouragement greeted every run down the home straight. 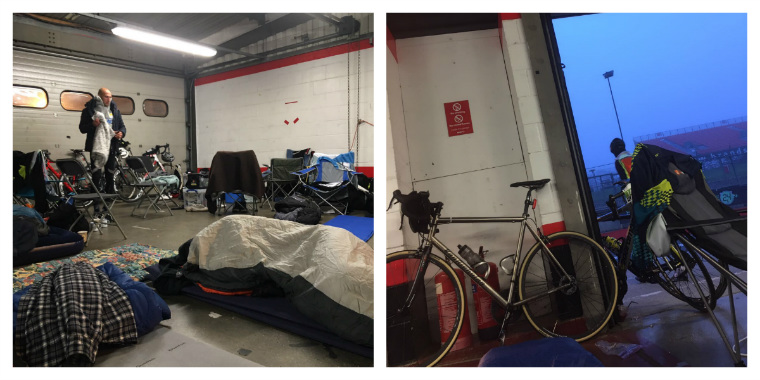 This is what sets Revolve24 apart. Cycling is essentially a solitary sport. You may ride with hundreds or even thousands of others, but ultimately you push those pedals alone. There's kinship and camaraderie, but nobody's counting on you, and you're not relying on anyone else. On this occasion, like golf's Ryder Cup, or the Davis Cup in tennis, you're no longer doing it for yourself, you're giving something to others. And with every clenched fist and rallying cry, you want to give more.

By the afternoon, everyone was searching for hidden pockets of energy. Drilling in deep, dark waters for scarce fossil fuels. You'd feel fully charged on the grid, but batteries would empty on the first climb. Several of the soloists now looked like they were pedaling into a wind tunnel the length of the Hadron Collider.

So it came to the final sessions. The reality was, we weren't going to catch the third-placed team (congratulations, Rolling Dynamics) or be caught ourselves by the fifth-placed team (commiserations, Ambitious Outsiders). There was only stubborn pride to ride for. And a desire to leave nothing out there on the track.

Ian led us out with one last heroic effort. Paul consolidated his position as team speedster. Alan registered his first sub-seven minute time in his final round and collapsed, dry heaving on the floor. The other brother even summoned an extra lap, super-charged by the sight of his daughter cheering by the fence. And then there was me, the cynical misanthrope, antipathy set aside and pushing all I could to make my team mates proud, relishing every last second. 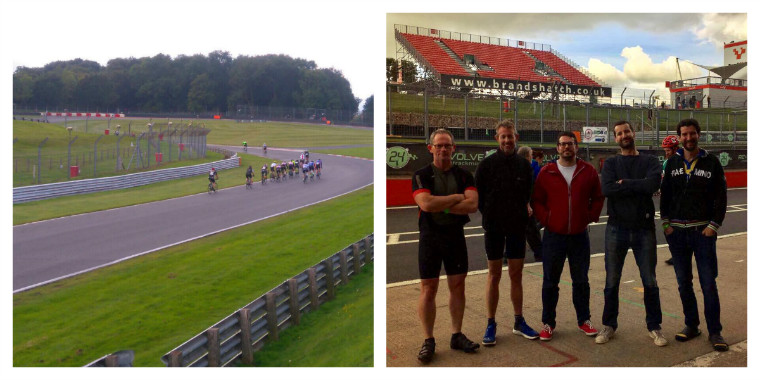 Two weeks later and it's almost like it never happened. Honorably discharged and returned to civilian life, nobody who wasn't there can understand what we've been through. We've journeyed to dark places few will visit, seen things that can't be unseen (sweaty middle-aged men in bib shorts), suffered together, survived together. We haven't spoken since, may never see each other again, but chain lube is thicker than blood, we'll always have Revolve24.

There are a few 'must-haves' if you're thinking of attempting a 24-hour event:

And how much of this list did I take for Revolve24? Not one jot, not a single item. A foldable camping chair and a couple of changes of kit, yes. But I came wholly unprepared for such a massive challenge. I'd completely underestimated it.

I revel a little (OK, a lot) in my ability to stubbornly withstand the cold and rain in 'full Northern' attire of short-sleeve jersey, shorts and fingerless gloves (Exhibit A being the Amstel Gold), but this was sheer madness. I regretted it especially after getting doused on my first session on the track.

The result? One hour's kip stretched out along four chairs in the Brands Hatch media centre (seemingly the only quiet and warm place in the vicinity), some mild hallucinations while riding in the mist at about 5am, smelling like Satan's crack and my missus recoiling in horror at my sunken eyes and haggard demeanour when I FaceTimed her and my daughter in the morning.

But the best tip I could give? Get out there and cheer on your team mates. There are inevitably going to be low points, times when you're wondering what the hell you're doing. But just a single cheer of "Go on!" from your comrades as they anxiously wait to 'go over the top' can make a world of difference. The difference between doing a decidedly average lap time and a PB.

The best bit is you'll only remember those cheers, those good moments, those laughs in the garage, that best lap time. The bad parts will soon be forgotten, lost in the pre-dawn mists of time.