We could take it on the chin if Martin Johnson beat us. After all, the former Rugby World Cup-winning captain and England coach already has both L'Etape and the Tourmalet on his distinguished cycling CV.

Broleur agreed we would even gracefully accept defeat by Jonathan Edwards, the Olympic gold medallist and reigning world-record holder for the triple jump. No disgrace in that.

But a line had to be drawn in the celebrity sand somewhere. And that somewhere was when we saw that John Inverdale was at the front of our wave of riders. There was no way we could contemplate being outpaced by the BBC's silver fox. We would avenge his denigrating comments about Marion Bartoli.

As we waited in glorious sunshine at the Olympic Park start line (chapeau to the organisers who got the 16,000 riders off in regimented fashion), Inverdale was in Broleur's sights. A bullseye painted on his back.

Ten-second countdown to Queen's Fat Bottomed Girls and we were underway, Inverdale soon but a distant - and distanced - memory as we set a mean pace through East London towards the City. No thanks necessary, Marion. 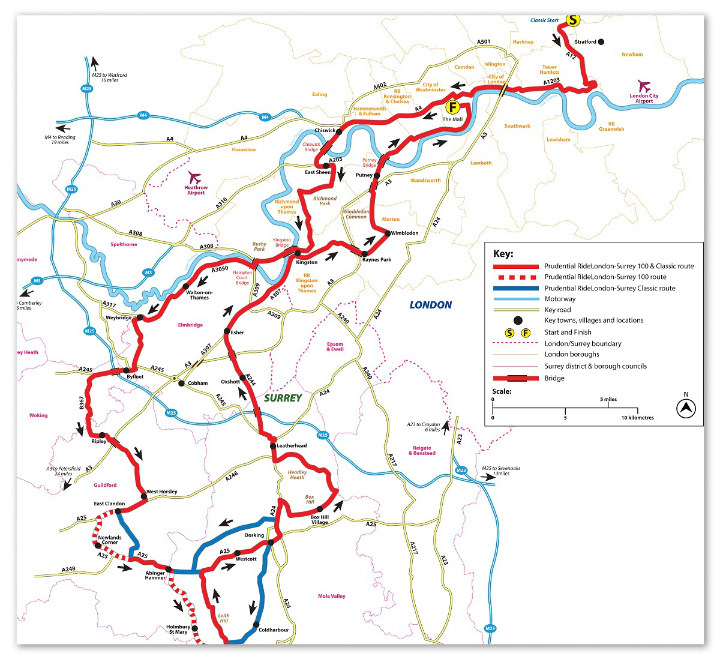 London and burbs in all their glory

London is a great global city. London with closed roads (on a bike) is simply glorious.

Having learnt the benefits of working together in a large group from the Velothon Wales, we settled into a pack of about 10 riders, everyone taking their turn at the front, weaving our way through the deserted streets of Central London.

Everyone that is, except a bloke in a Welsh dragon jersey, who ignored all elbow flicks, verbal encouragement, muttered asides and visible head shakes and sat second wheel all the way through Kensington, Fulham, Hammersmith and Chiswick to Richmond Park. At which point, he decided he'd had enough of the free ride and pulled away on Sawyer's Hill. We never saw him again and forgot to log his number. The anger still burns. 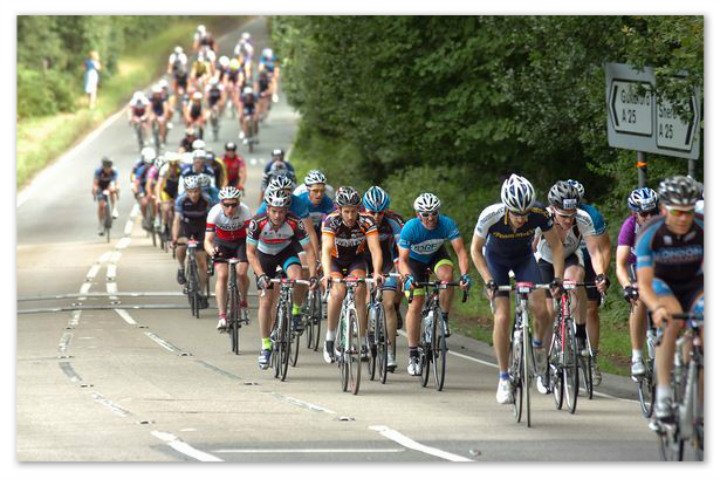 Out into leafy Surrey, with its picturesque little villages and astronomical property prices, and on to the feed station at Newlands Corner. A welcome relief in more ways than one. Toilet stop, check; bananas in back pocket, check; refilled bidons, check, and Broleur were off again on a delightful descent towards the day's major climb, Leith Hill, the highest point in South-East England.

To be honest, it's nothing to give a grown man night terrors. Yes, it goes on a while. Yes, certain riders ignored the signs that asked the tortoises to stick to the left to allow the hares to pass on the right. But it's manageable, ramping up to a max of 14%, and there was a real bonhomie between the riders, shouts of encouragement ringing out. 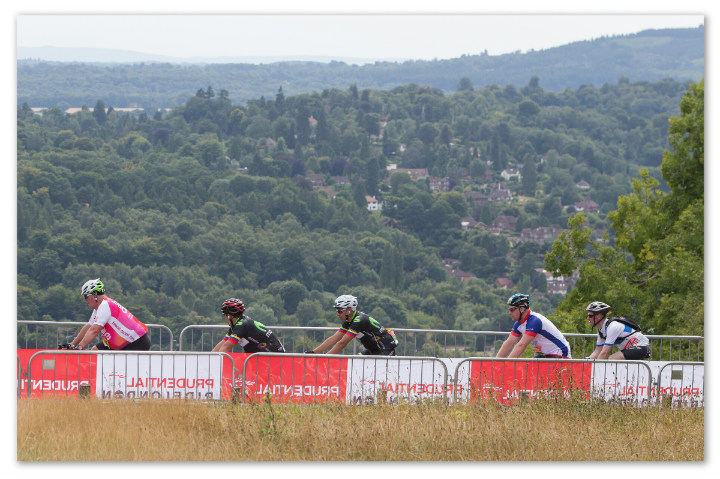 We felt strong, lapping up the cheers in Dorking from the teams supporting the many charities championed by riders. Broleur was on familiar territory. Home turf. Our manor. Box Hill was duly beasted. Light as a feather, strong as an ox.

Our thoughts drifted to average speeds, PBs and record times. Two good friends, and therefore rivals, were riding the event. Wardy and Steve. Elite riders of the fabled Ventoux Quatre. 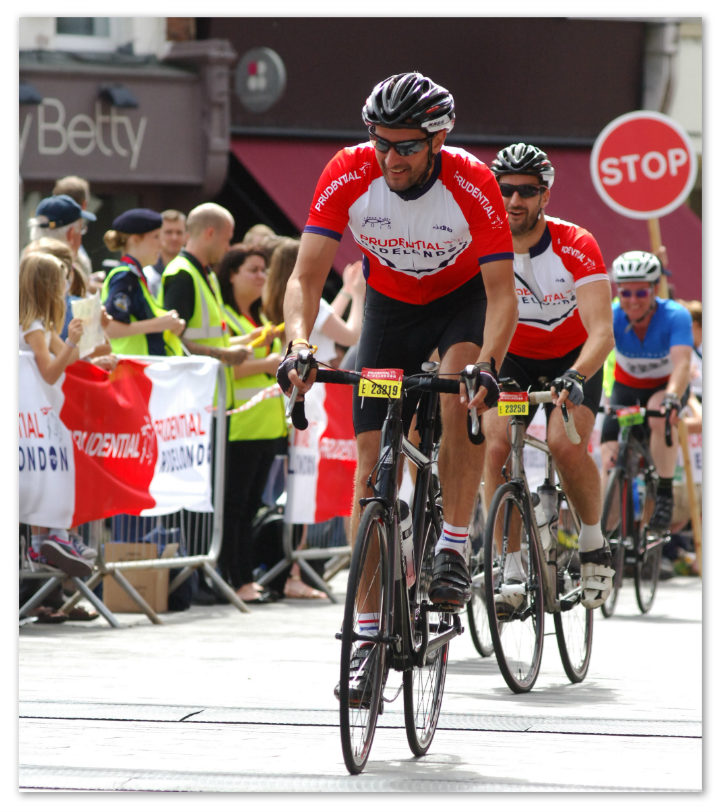 But one should never, ever underestimate a 100-miler. At some point, somewhere, they will kick you in the teeth. What should have been a high-performance procession back into London, showboating, playing to the crowds, soon turned into a painfully slow grind. Kudos to the previous year's participants who battled through a biblical downpour.

Had Bunteur misjudged his feeding strategy? Maybe, maybe not. All we can know for certain is that when he reached Wimbledon, he was cooked, the dreaded 'bonk' fast approaching. When all hope seemed lost, there appeared a small water station at the top of Wimbledon Hill, its awnings shimmering like an oasis in the desert. Gel ingested; bidon replenished. We had a ride to finish.

On through Putney and back into the heart of London, the crowds urging us along. Not much in the tank but if ever there was a time to survive on fumes, this was it.

Past the magnificent Houses of Parliament in Westminster, almost too many sights and sounds to take in, the finish line so close we could almost taste it (chalky with a bit of grit). 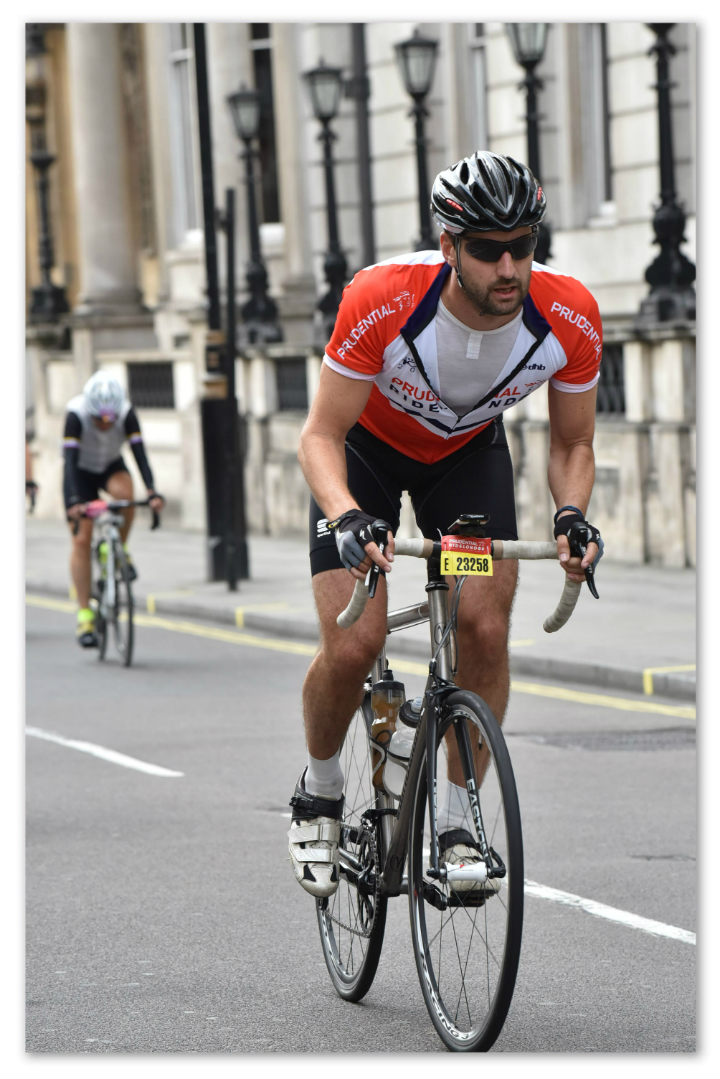 On to The Mall and Broleur was set up for the sprint up the Mall to Buckingham Palace. Bunteur the lead-out man, the other brother biding his time, drafting in the drops. Time to drop the hammer... only the other brother suddenly pulls up with cramp. Leave him and take the tape, arms raised aloft to the heavens à la Mark Cavendish?

No. That's not how we roll. Brakes gallantly applied and Broleur crossed the line together, brothers united in glory.

However bad the bonk, however chronic the cramp, others had it worse. Word came through that Wardy had crashed into a traffic sign in Wimbledon and come off second-best. Set fair to finish in less than five hours (which would have smashed our time), his sportive was cruelly cut short. 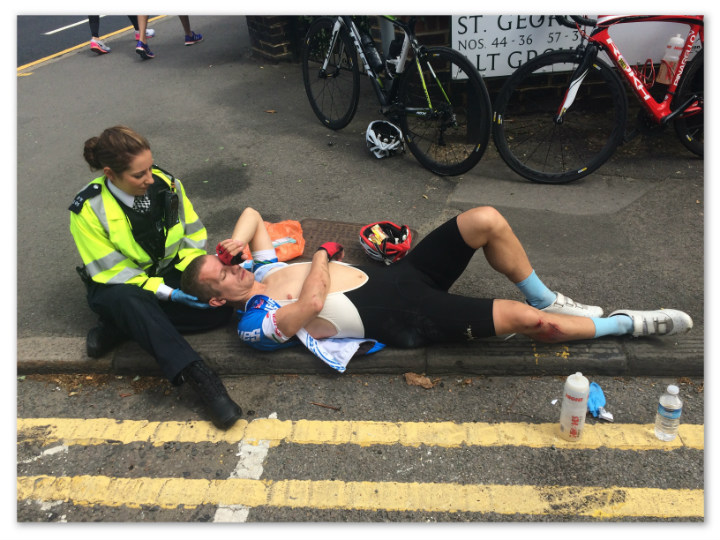 Luckily, he received fantastic medical attention at the scene and escaped with just a nasty case of road rash. The traffic sign was undamaged in the incident (Wardy wouldn't have wanted that on his conscience), but apparently the poor WPC who had to witness the bib-shorts is still signed off work and undergoing counselling. We wish her a speedy recovery.

For Broleur, the journey, not the destination, is the reward. But there's no debating a good end to a ride can help top off a top day in the pedals.

We want signs. 5km. 4km. 3km. 2km. 1km. Nothing worse than being ambushed by the line. We like advance warning so nothing is left out there on the road.

Give us a straight sprint finish on a flat, wide road. Spectators with hoardings to beat. An inflatable arch. An audible beep from the timing chip sensor so we know our time has been logged.

Medals hung over our necks with some sense of ceremony. (Not fished out of a ratty cardboard box). Podium girls would be ideal, but kindly old lady volunteers are just fine.

If there's a goody bag, put some goodies in it. Leaflets are not goodies.

Savoury food if you please. After four or five hours of synthetic sugars we crave good, honest, wholesome fare. It doesn't have to be pasta.