My son's school rugby team was touring South Africa. My wife wanted to be close in case her baby was hurt by those big saffers. My daughter wanted to see baby penguins and elephants. We were permitted to enter the country on the understanding we wouldn't shame him by making an appearance on the touchline. "No-one else's parents are going."

Cape Town. What's not to love? The setting, the climate, the food, the time zone, the weak currency...

What turns up if you just so happen to ever so casually search on "cycling in Cape Town"?

Google is my friend. I learned about the Cape Town Cycle Tour, aka "the Argus" - the world's most populous sportive, attracting 30,000 riders - so I had a 125km route to trace. Then I discovered Cape Town Cycle Hire offering a Giant TCR Carbon - I had wheels.

The stuff of dreams

The bike was delivered to our AirBnB apartment early on a fresh, cloudless day. I screwed in my pedals and rode. 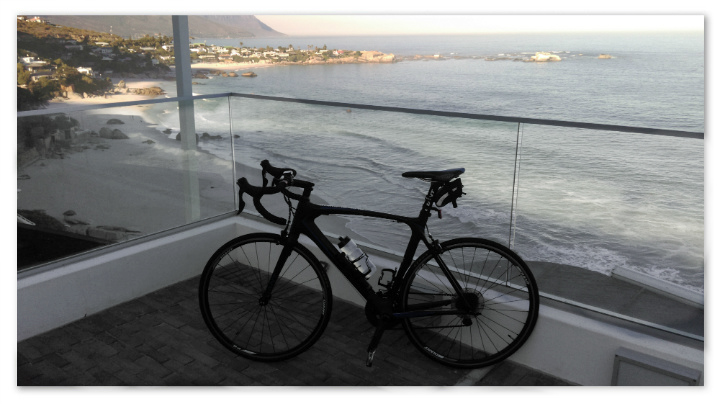 Some early challenges with the Shimano shifters (I'm used to SRAM), then I was cruising past the morning joggers, along the coast through Clifton and beyond the beaches of Camps Bay. People, dreams can and do come true.

The road climbs steadily as you leave the southern suburbs. A headwind picks up. Blue seas to the right, charred scrub to the left a reminder of the bush fires that had wreaked havoc with the official ride a month before.

Chapman's Peak is the daddy of the climbs, but very do-able. Nothing that would challenge a practiced alpinist. But frankly, this ride is not about heads-down spinning. It's all about the views, which are simply spectacular at every turn. 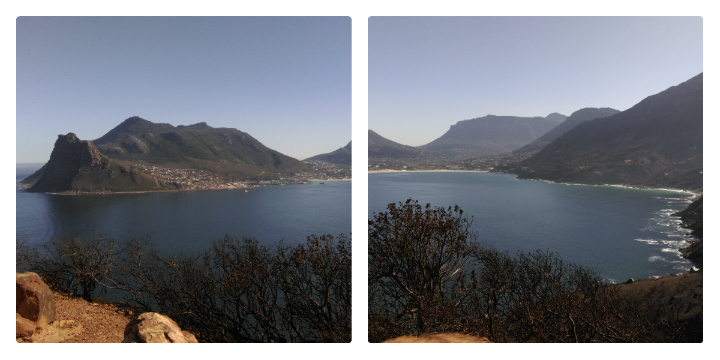 At the top of the peak, a very friendly young man armed with walkie-talkie, high viz vest and token flag was waving down cyclists. The fires had increased the risk of rock falls ahead. Cars could pass, but not bikes.

Having come this far there was no turning back. He shrugged - be it on your head, literally. I pressed on down the road, which had been bored through the cliff face. Like surfing the barrel of a stony wave. Emerging to views of the broad arc of Noordhoek beach below, tiny grey horses cantering across the sands (a perspective thing, not a pygmy breed). 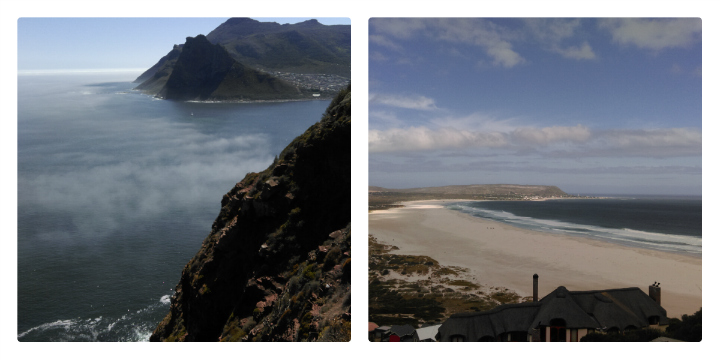 On through the comparatively featureless hinterland through Fishoek to the Olympia Cafe in Kalk Bay, a minor but very welcome diversion from the official sportive route. Characterful and careworn. The kind of place that was made for instagram. Magnificent crema on the espresso. Freshly baked carbs from their bakery. 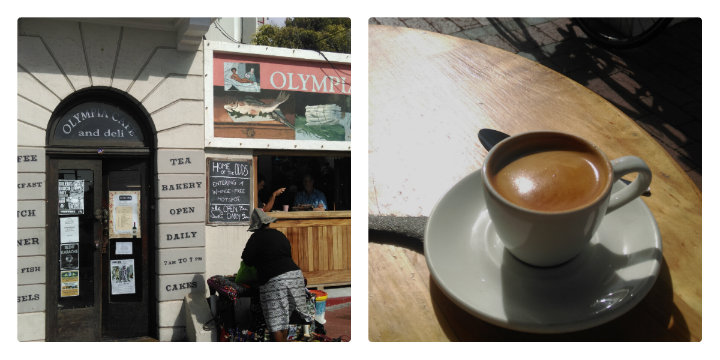 Beyond Boulders Beach and back

Baboons stared at me from the roofs of the last scattering of houses beyond Simon's Town. It really feels like you've reached the very tip of the continent. The grey South Atlantic reaches out to a gently curved horizon and looking inland through the sea spray mist, I got a sense of what the first European explorers would have seen and felt as they approached the rugged coastline. 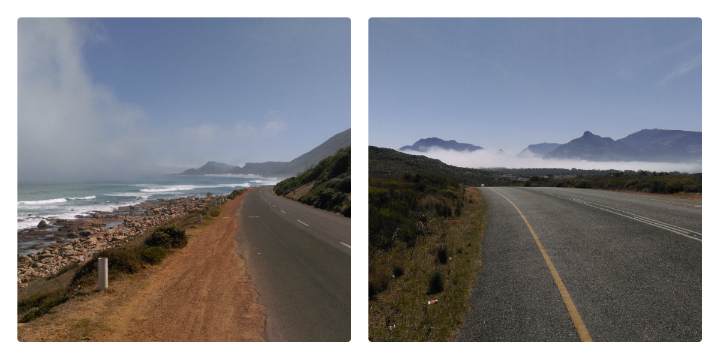 Turning in from the ocean and entering the heart of the Cape Peninsula, the temperature rises. A second long slog follows, taking you over Plateau Road and then down alongside the appropriately named Misty Cliffs. Not even cars for company. If there weren't vultures circling, there should have been.

It was a relief to get through the town of Kommetjie and close the loop. I powered back to the top of Chapman's Peak, heartened by the sight of familiar signs and landmarks. Feeling strong, and without the benefit of a Garmin map[1] for certainty, I texted base optimistically.

Fool am I. My warped memory had somehow erased a glorious fast descent into Hout Bay. A descent that now became a relentless mono-gradient, granny-geared grind. The Suikerbossie. Sucker punch more like. 60km/hr one way, 6km/hr back. 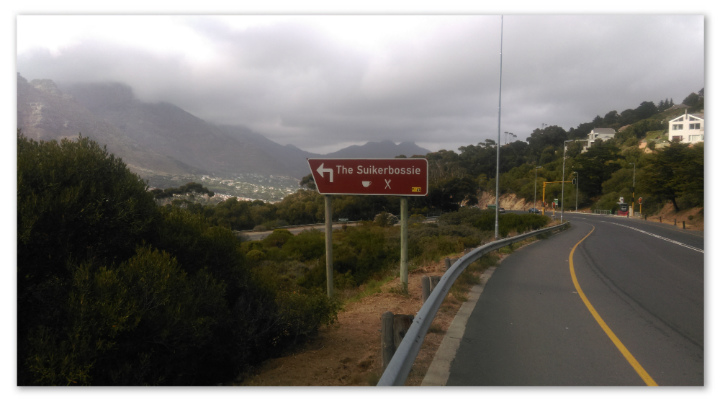 Piss poor planning. Where was Bunteur[1:1] with his bottomless pockets of tuck?

Now it was just a matter of eating up the miles. Lunchtime diners flocked to the outdoor restaurants of Camps Bay, oblivious to my suffering. The sun still shone, but the sparkling seas had lost their lustre. At the gates to the apartment, I climbed off the bike like a cowboy at the end of his maiden cattle drive. Very, deeply, deliciously, spent.

As I was warmly scolded for getting back a whole hour past my ETA, I smiled (inwardly, to avoid a sharp slap) and vowed to return to ride the sportive. With my brother... and 30,000 others.

As the self-appointed domestique of Broleur, I'm always sure to take extra bars and bananas on our weekly jaunts.

Just as I know - and have come to accept - that my brother is invariably between 5-10 minutes late for any rendezvous, I also now anticipate he will have forgotten or lost one or more of the following: glasses, gloves, food and/or energy drink.

The 'Bunteur' jibes usually start about the mid-point of a ride, after I've generously offered him half an energy bar or refilled his empty bidon from my own. They usually take the form of an imaginary excerpt from a children's book:

Bunter looked inside his tuck box...his puffy cheeks reddened, his eyes filled with tears and he clenched his fists tightly. "What's wrong, Billy?" asked the teacher.
"Somebody stole my tuck!" wailed Bunter as his chest heaved and he began to sob uncontrollably. 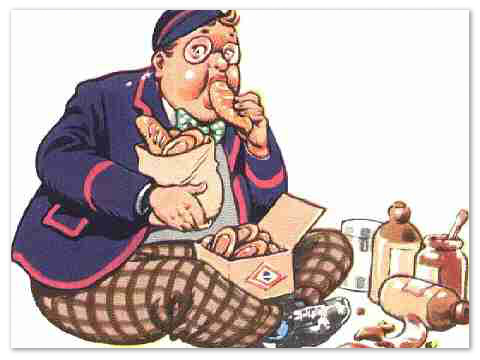 The thing is, despite being the butt of the joke, I can't help laughing and even joining in - picture me at the hotel breakfast buffet, the morning of a ride:

Bunter's eyes lit up as he saw the spread before him. Sausage rolls, roast beef sandwiches, a chicken and ham pie, potatoes dripping with butter, a moist chocolate cake and even a rich plum pudding.
"I'm going to eat the lot!" he squealed with delight and ran to the feast as fast as his stout little legs could carry him. 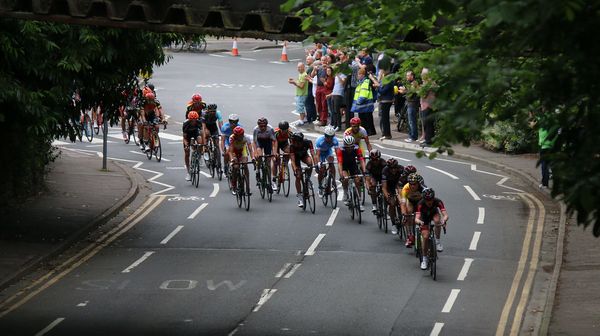 Any sportive featuring the notorious Tumble and Caerphilly Hill has got to be worth a crack. But would les Broleurs crack on the Velothon Wales? See what's occurring in the Brecon Beacons. 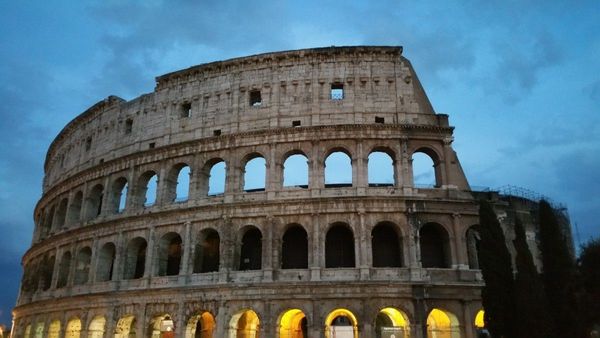 Departing from the Coliseum at dawn, the Granfondo Roma is a sportive unlike any other you're likely to do. The combination of historic setting, rolling hills and fine food and wine make it the perfect way to wrap up a cycling season.