It's almost impossible to find a picture of the Tour of Flanders without a grimace etched on the riders' faces. In most they're wearing long-fingered gloves and tights and in some you can see their misty breath hanging in the cold air.

Through the preceding winter, every time the weather turned foul or the riding got gritty, we'd talk about Rule No5, the need to HTFU and learn to deal with 'Belgian' conditions.

The Ronde van Vlaanderen (RVV) will always hold a special place in our hearts. Broleur's first ride on foreign soil. Our first Spring Classic. A first ride over cobbles. We opted for the 140km route, taking in all the famous bergs and cobbled stretches, but missing out the reputedly dour flat run from Brugges (and the logistical issue of getting back to our bags at the start).

An auspicious start. We might cycle the rest of our lives and never have a pre-ride meal like the one we enjoyed in picturesque Ghent. Charcuterie. Lobster pasta. Pig cheek stew. Grimbergen ale. Truly magnificent.

Team Broleur opted to ride in Belgian colours in honour of our hosts. This brother in an old-school Raleigh top. The other brother sporting a jersey adorned with the appropriately-coloured flag of Maryland, home of proud in-laws.

An open start meant a distinct lack of occasion. Without fanfare, we casually rolled past the chip timer and that was it, we were off, almost without knowing it. Along canal paths and lanes that cut through low-lying farmland. The air was still and the temperature kind. We progressed apace.

One of the nicer touches along the route of the RVV are the yellow signs telling you how high and long each of the 18 climbs and cobbled sections is. We had no need for them. The other brother must have studied the parcours every night under the bedcovers by the light of his mobile phone. He knew every climb by name. Its profile, length and surface. He was keen to get acquainted. Like visiting a bunch of Belgian pen-pals he'd been writing to for years but never met. 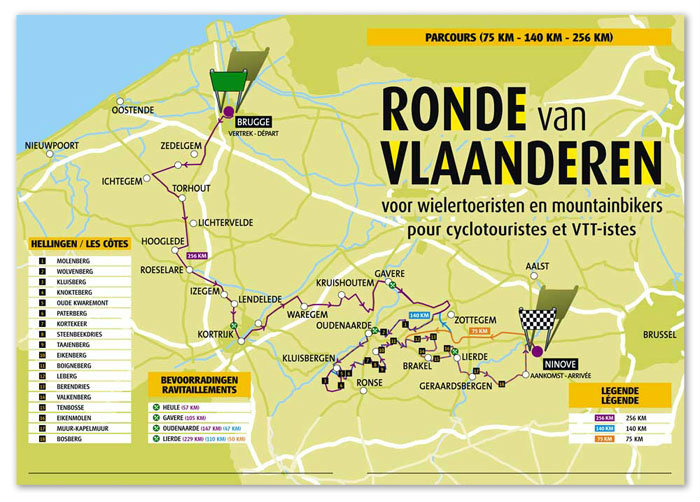 We'd both prepared by applying an extra roll of tape to our bars. I'd gone a step further and switched to 25s (anything for a marginal gain in comfort). The other brother on his masochistic 23s suffered an early puncture. An ugly nail right through the middle of the tyre. Neither of us is particularly adept at dealing with mechanicals and our ham-fisted attempts cost precious minutes. It took a few miles of silent fuming for the other brother to get over the setback and regain his mojo.

The brutal bergs of Belgium

The cobbles came thick and fast. Or rather, lumpen and uneven. First the long steady climb of the Molenberg then a joint-jarring descent the other side of the Oude Kwaremont, chain slapping the bike, bidons bounced from their cages and scattered across the road.

Knees flexed. Even pedals. Soft wrists. Gritted teeth. Apparently if you hit a certain velocity it's possible to float across the cobbles. Float schmoat. 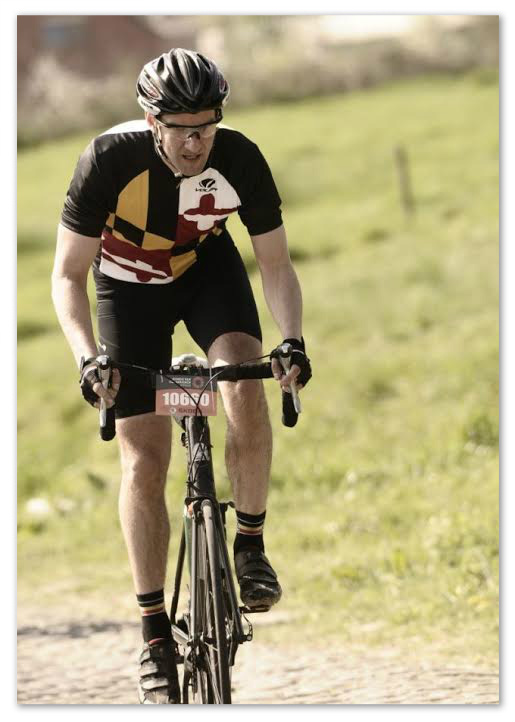 The fabled Koppenberg. Claustrophobically narrow, steep and horribly cobbly. Not quite the babies' heads of the Paris Roubaix pavé, but gnarly nevertheless. Almost impossible to get a good run at it because of the approach and numbers, but surmountable if you get past the first third still in the pedals. We didn't. The other brother nudged a rear wheel and stalled. No way past. I managed to get back on and somehow regain momentum, easing away from the voluble cursing of Bunteur as he tried in vain to push off without a chain on the ring to assist.

On through the bleak Belgian countryside. At one point we found ourselves being paced by a couple of guys on mountain bikes with 29ers. Possibly the wiser choice of wheels. Certainly a better option than the penny farthing selected by another brave soul.

Finally, the Paterberg - the last and longest of the climbs and the only challenge standing between us and another Grimbergen. Beer tents had been erected either side of the hill to entertain the crowds watching the real deal the following day. But even the amateurs got a great cheer of encouragement from the smattering of spectators. Hup, hup, hup!

It was only at the top that I turned. The other brother nowhere to be seen. Triumph turned to trepidation. Not concern that something might have happened to him, but that I might have to descend with a spare inner tube - and be forced to repeat the slog up the Paterberg. Minutes ticked by with texts unreturned. Then a distinctive figure, proudly up in the pedals, like the rampant lion of the Flandrian flag.

There are few better sensations than the soothing calm of smooth tarmac after the juddering of cobbled 'straat'. We hunkered down for the last stretch to Oudenaarde, burning Belgian waffles and a sugary-sweet refill. A couple of times we felt the hum of wheels and a rush of wind as an express train passed us: faster, fitter riders finishing the long route from Bruges. One old timer clung to our back wheels for the last few miles, but we shook him loose on the final straight. 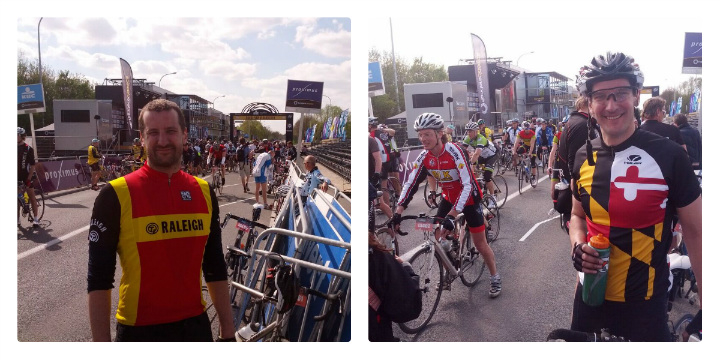 Handlebar stigmata and the coward's finger

Grimaces turned upwards into broad, if slightly pained, smiles at the finish. Despite the cushioned grips and gloves, my palms were adorned with stigmata-like blisters, while the other brother's continual dabbing of the brakes had left him with a chronic case of Coward's Finger. He could barely grip his tulip of beer.

Belgium is largely flat. The bergs are short and steep. But the Ronde van Vlaanderen remains a high point of Broleur's cycling lifetime. If you get the opportunity, it's a classic. 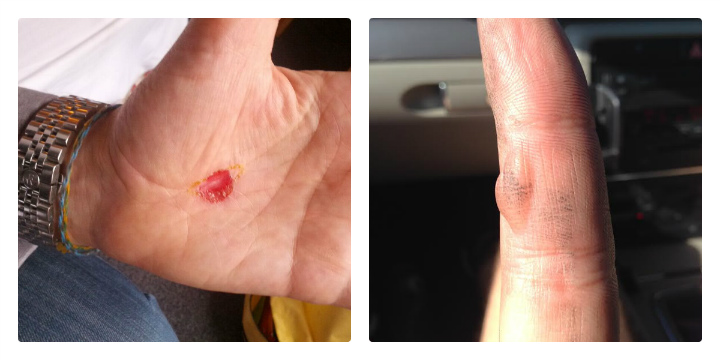 If you're ever short of a few bob, get a job as a taxi driver in Ghent; Broleur was charged an extortionate, eye-watering amount for the short ride to Oudenaarde to watch the pros take on the RVV.

I'd now pay double that amount, though, as the experience was nothing short of brilliant.

We arrived just in time to see the riders fly past but, while a thrill, that wasn't the best part. It was mixing with the locals, chugging your €2 halves of Jupiler, munching on foot-long sausage baguettes, watching the race develop on the huge TV screens dotted around the town square.

We thought we'd take a chance and head towards the finish, see if we could crane our necks and catch a glimpse; we ended up one row from the barrier. A perfect vantage point to watch Spartacus himself, Fabian Cancellara, claim an incredible victory. Result.

Then it was back to the bar, only for a friendly Belgian fella to buy us both a pint of double-digit-strength local beer. That moment lived long with us, as did the other brother's gas. 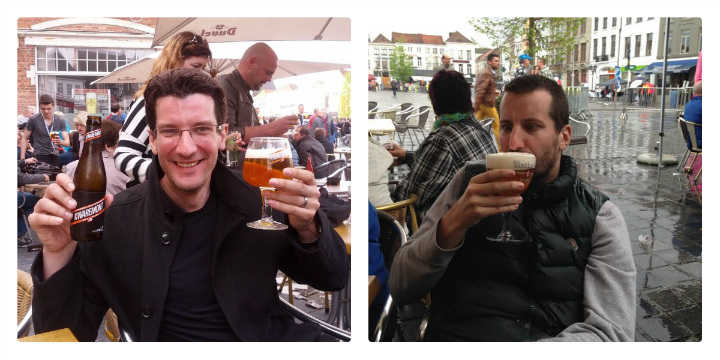