A half-term family get-together in Dorset to celebrate the brothers' mother's 70th birthday. We love our Mum, she's ace. Lyme Regis has an awful lot going for it too. But when we discovered the Tour of Wessex was departing a mere 27 miles from our holiday base, there was little option but to enroll. Some things are just meant to be.

Actually, it's a small wonder we were able to sign up, given the state of the organiser's website. No proper route map. No details on feed stations or the profile of the hills. No excuses these days for not being able to put a decent site together. Must try harder.

Shame, because the event itself is an absolute cracker.

The Tour of Wessex is an out-of-the-ordinary sportive that doesn't have the profile of similarly testing rides such as the Fred Whitton Challenge or the Dragon Ride. Like the latter, it runs over three successive days, each topping 100 miles and packing in a leg-punishing amount of climbing. Using the town of Langport as a base, the routes loop out in three different directions taking in the best of Somerset to the East, Dorset to the South and Devon to the West. Entrants can sign up for the whole thing, or pick a day, any day.

We opted for Day Three on the bank holiday Monday. Not the longest at 108 miles, but with over 3000m of climbing across the exposed expanse of Exmoor, arguably the most gruelling.

Two days of gluttonous celebration were not necessarily the best way to prepare. But the early morning drive over undulating hills was enough to sober us up and focus the mind on the task in hand. We arrived in innocuous Langport and were efficiently marshaled to the car park to assemble bikes, primp and preen.

The event has a charming, slightly careworn feel to it. Many of the participants choose to camp nearby creating a sense of community. Kindly rotarians dish up bacon butties and tea from steel urns. The vintage Claud the Butler coffee van dispenses high quality espresso. Sadly neither accepted cards, so these cash-poor city folk ended up mingling at the start line without the benefit of a final caffeine hit. 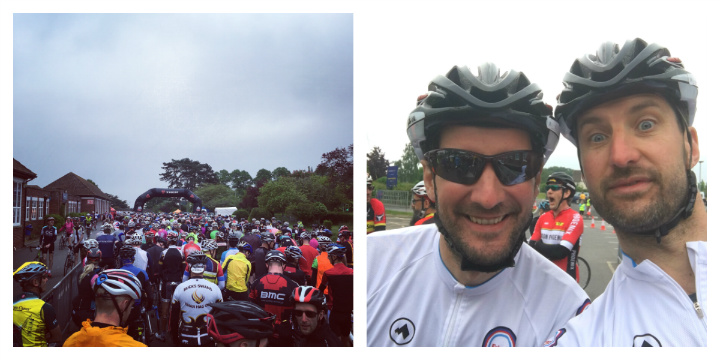 There was a discernible camaraderie among those gathered in the pen contemplating the last leg. Pitching up fresh and eager, it was hard not to feel something of an imposter. Like a pair of John Terrys appearing on the pitch after the FA Cup final to lift the trophy wearing full kit.

At five-minute intervals, waves of riders were dispatched by an interminably cheery tannoy guy. Knowing there was a long, long way to go, we took it in turns to warn each other to ease off the gas. But the roads were rolling and fast so it was inevitable that we'd catch the back of a speeding train or two and gather pace. Easy miles.

It's funny how quickly and arbitrarily one divides the peloton into notional allies and rivals (or is that just me?). In a fraction of an instant you judge who you're going to compete with and who you're proud to complete with. So it was that the stout lad sporting a distinctive tablecloth-patterned jersey who had the temerity to pass us not once or twice, but three times (the cheek of it) came to be our designated rival for the next ten kilometres. No contest. Tablecloth folded on Hawkridge Hill, the first significant climb. Cast on to the dirty laundry pile.

What goes up, must come down

Quantock Hill proved more of a challenge. A worthy climb with a ramp halfway up topping out at 25%. On the other side, a white-knuckle descent down a twisting, turning, treacherous drop. It stops being fun when you genuinely can't stop. Brake blocks smoking on screaming rims - an appropriate moment to consider the merits of disc brakes on the road.

And so we arrived at the first feed station with trembling knees and blistered brake fingers. One unfortunate rider sat on a dry stone wall being gently swabbed by the motorbike medic, lycra shorn from his hip and shoulder, the scuffed skin beneath a vivid red.

There were admittedly more beautiful sights to behold on the bobbling road ahead. Stunning Dunster castle a highlight, perched atop a hill beyond green fields of the kind you only find in England. But there was little time to contemplate the views. First there were the busy A roads around Minehead to traverse, and shortly after, the first signs for Porlock began to appear. 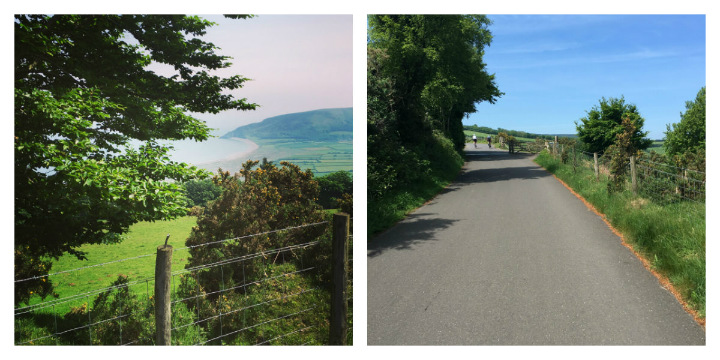 Porlock Toll Road may not be the toughest of the climbs on the route, but it's certainly the longest. And unquestionably one of the most beautiful climbs we've done - anywhere in the world. Six and a half kilometres of smooth, steady, switchbacks scaling through gently dappled woodland. More of a spin than a grind, as you climb you're rewarded first with views of the pastures below and then the blue seas beyond. It almost feels like you're levitating to the summit.

No country for old men

Emerging at the top, the scenery changes dramatically. From lush green to sparse brown. Exposed to the elements (which on this day were mercifully kind).

At the 90km mark on a sportive, you've usually found your level. All the riders you're going to overtake have been overtaken, all those who are going to overtake you have long since done so. If a cyclist can be judged by the company they keep, then we were in a whole world of trouble.

A series of brutal bergs sapped the last dregs of energy from exhausted limbs. The assault on Bury Hill resembled the opening scene of Saving Private Ryan. Cyclists stood high in the pedals and staggered sideways across the road, bodies jerking and spasming as if caught in heavy machine gun fire. One brave soul choked down his last dry energy bar without the benefit of saliva - blowing crumbs like he'd emptied a bag of sawdust into his mouth. The other brother's head lolled from side to side as the last of the oxygen emptied from his lungs and he cramped in his groin. We didn't stand a chance.

A pact was struck. At the next village we would stop for a sandwich. No question. As the idea took hold and exhaustion crept in, the hallucinations began. A shimmering Costcutter or Nisa would appear on the distant horizon - only to fade like a mirage as we approached.

We crawled to the final feed stop. An oasis of sweet energy drink, halved bananas, fig rolls and jelly babies - the good quality ones, coated in the fine sugary powder. But by this point the savoury fixation was such that we opted to clack over to the pub across the road and order a packet of salt and vinegar crisps each (anti-cramping treatment) and a pint of Coke with ice, which had Bunteur's little toes tingling and raised goosebumps on my arms. 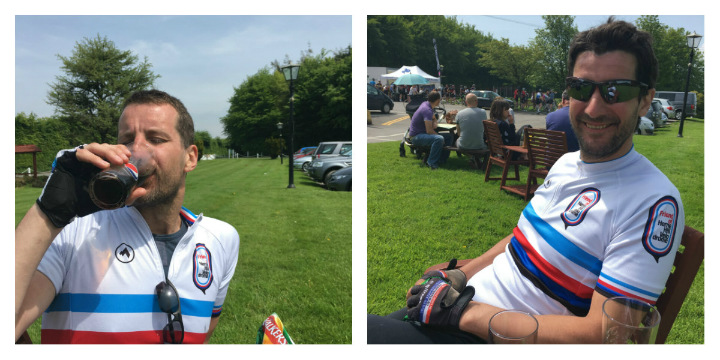 Onwards. One small hiccup of a climb and then it was downhill all the way. Still 50km, but the finish felt within tantalizing reach. It was like we'd started over on a different ride. We actually managed to get some speed up, taking turns at the front, throwing in the odd bit of #bantz and amicably yo-yo-ing with a friendly pair of fellow-riders. All was well with the world.

Then with just two kilometres to go, a chequered flash. Tablecloth. How the fuckety-fuck-fuck did that happen?

Not a word was spoken, but the other brother intuitively sensed my anguish. Still cramping sporadically, he urged me to push on. I just knew I could take tablecloth to the cleaners. But could I leave my broleur?

Then from nowhere... a guttural roar and with the courage of a maimed lion, the selfless Bunteur hurled himself forward, putting down an unfeasible wattage. Surging ahead and urging me to get on his wheel, determined to lead me out to victory, even if it meant sacrificing himself on the tarmac altar. The gallant Renshaw to my cavalier Cavendish.

It lasted all of about 45 seconds. With rueful smiles we eased off and watched as the checks on Tablecloth's back diminished in the distance. Not this time. We crossed the line together, truly spent. We just wanted our mum (and a beer). 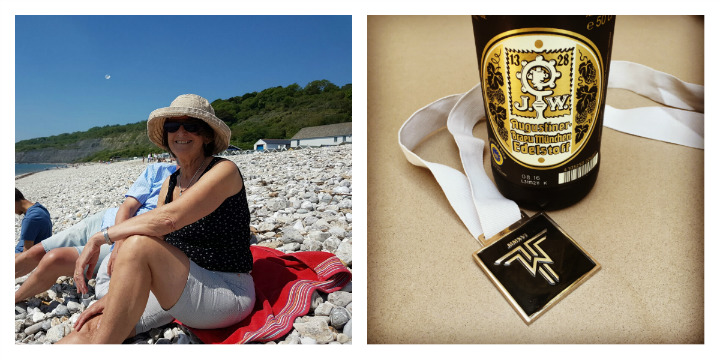 In cycling circles, it's said you get three 'matches' to burn on any ride. Three times you can dip into the red before your energy levels are declared bankrupt.

Go too hard, too early and you risk having nothing left to strike in the latter stages. Then again, no one wants to finish a sportive thinking they hadn't given absolutely everything. It's a delicate balancing act.

I knew before Wessex that I'd burn two matches on the standout peaks, Quantock Hill and Porlock Hill. They were my targets to smash - and proudly smash them I did, beaming at the top in anticipation of the Strava KOMs to come. Unfortunately, in the process, somewhere up Porlock the final, crucial match was expended.

In ancient Greek mythology, Sisyphus was punished for his hubris by being made to roll a boulder up a hill, only to watch it roll back down, repeating his efforts for eternity. My private purgatory involved dragging myself over hillock after mojo-crushing hillock, descending one only to find myself at the foot of another.

What I hadn't accounted for was the fact that at 182m and 366m, Quantock and Porlock together comprised less than 20% of the total climbing for the day. In fixating on the big climbs, I found myself having to tackle the smaller ones that made up the rest of the ride with nothing more than three blackened match stumps.

Completing just one day of the Tour of Wessex was brilliant, beautiful and very brutal, so chapeau to those who did all three. That's a badge of honour you can wear with pride. (I just hope you packed some spare matches).