It’s a fairly common occurrence for us to rock up at a sportive minus an important piece of kit. And by “us”, I of course mean Steve. Gloves, shades, bidons, food… my bro can be relied upon to have misplaced one or all of the above before the big day, whereas I’m meticulous, bordering on OCD, about my preparation.

But for the Delaware Gran Fondo, I picked up the torch and ran with it… by turning up for a road sportive without an actual road bike.

Unfortunately, my pride and joy was still stuck in a Delaware storage facility following our transatlantic move, so the gravel bike had to be pressed back into service just two weeks after its debut tour of duty in the Brandywine Valley Roubaix.

I suppose I could have looked to rent a road bike and shoes but a) I couldn’t be bothered with the hassle, especially with going back and forth between the in-laws’ in Elkton, Maryland, and our new house in Annapolis several times a week, and b) there looked to be only about 1200m of ascent in the Delaware Gran Fondo over 100km, which surely wouldn’t be too horrific. It wasn’t like I’d be attempting to join Le Club des Cingles on a Penny Farthing. Still, I felt a bit like a fish out of water before the mass start at Wilmington’s Delaware Art Museum, among a multitude of millionaires’ mansions, clad in my baggy shorts and beat-up old trainers. My one comfort was that I’d brought a strong sock game to the occasion.

Escorted out of town

The plan was to get on the back of a large train from the off and just shamelessly draft to my heart’s content. The organisers must have unwittingly been in cahoots with my evil genius as we got a police motorcade - instantly reminding me of a childhood TV favourite, CHiPs - to guide us out of town, which meant it was a very sedate start and easy to stay in a bunch. You don’t mess with American coppers and these guys looked a lot meaner than ‘Ponch’, so no one made a cheeky break.

To be honest, I was happy to take it nice and slow because that meant I could take in the stunning surroundings of the Hagley and Winterthur Museum grounds. With the trees and azaleas in full bloom, you’d have to be an ingrate not to appreciate the sights on offer.

One of the many things I’ve loved since our move to the US has been the unbridled enthusiasm and infectious positivity of Americans. It makes a wonderful change to the cynicism and persistent whinging of us Brits that can often suck the joy out of occasions. I even almost joined in with the whooping and hollering as we passed through the delightful village of Montchanin and entered the verdant greenery of the First State National Park, which reminded me of growing up in leafy Lancaster. I promise I’ll do better next time, although it might be a step too far for me to join in with the chorus of “It’s a hill, get over it!” every time we came to an incline.

Wherever you looked in the opening 30km there were the kind of ridiculous houses and nail scissor-manicured, billiard-table lawns that wouldn’t look out of place on The Wolf of Wall Street. There's some serious wedge in this part of the country.

Fun fact time: Delaware is the fifth flattest state in the US. OK, it isn’t that fun but it is pertinent. The parcours through the picturesque Brandywine Valley had a few lumps and bumps but nothing to make me curse the cycling gods for having fatter tyres and a heavier bike than my fellow riders. There were two timed climbs before the feed station around the halfway mark but, with the first averaging 7% and the second just 4% and a max of 9%, they were thigh ticklers rather than tremblers.

After the BVR, I had high hopes for the goodies in store at the magnificent setting of the Marshall Steam Museum in Auburn Heights. Surely a hog roast? Or BBQ sauce-glazed ribs? Sadly not, I just recall a lot of pre-packaged PBJ sandwiches. Not a homemade flapjack in sight. It must be said, though, that the second feed station after 75k at the Woodside Creamery was a lot more enticing, with cookie delights aplenty.

Hang on a sec, we’ve missed out about 20-odd kilometres here… 20-odd kilometres that were on home turf, the area where I’d been racking up the Strava local legends (KOMs have been conspicuous by their absence), around Hockessin and Newark. It was lovely to be on familiar territory and equally nice to tag along with a trio of riders who recognised my accent “from across the Pond” and asked if I’d tow them to the finish line as I was “looking strong” (I probably blushed and giggled a little, I’m a complete mug for cycling praise even if it isn’t true).

I became involved in a good-natured, yo-yo battle with one of the trio in particular, ‘Nairo Quintana’. I’d surprisingly overtake him on any incline, allow myself a smug, self-congratulatory smirk, then watch as he came screaming past, hunched down on his aero bars, on any downhill. Unfortunately, though, an untimely puncture for Nairo brought an early end to our unspoken duel. Honours even.

While the first 75k had been on heavenly quiet back roads and tree-lined country lanes, the final 25k back to Wilmington was more like a highway to hell. That might be a slight (make that massive) exaggeration but Routes 82 and 52 aren’t the most scenic and were very busy with traffic, with a bit of pothole dodging thrown in for good measure. But while I wouldn’t describe it as a pleasant experience, it does encourage you to put your foot on the gas and floor it.

Further encouragement came from an unlikely source. An old fella, at the wheel of a huge SUV, was waiting to turn into his driveway, wound down his window and poked his head out. I was expecting a torrent of abuse for holding him up but instead he shouted: “There’s cold beer waiting for you at the finish!”

He wasn’t wrong. But before I could tuck into a can of IPA and a pulled pork sandwich (chapeau to the organisers for that), I had to do a couple of laps of the car park. Not to keep the legs moving but because when I stopped Strava I saw that I’d done 99.7km. There was no way my OCD was going to let me finish my ride 300m shy of a century.

Three days after I crossed the Delaware Gran Fondo finish line, my road bike, along with most of our belongings, finally arrived at our Annapolis home. I’m itching to get out on it, explore more of Maryland and renew our romance. But I’m not ready to end the relationship with the gravel bike just yet. Next up is June’s Gravel Grape Crusher, so I guess I’ll be double dating until then.

There are murmerings as the doyens of the local cycle club gather one early evening in the Mechanicsville Roastery.

"Whaaat!? Barret told me he stole Harvest Lane last week - again. Who the hell is this guy?"

"I heard he once killed a squirrel stone dead. With his bare tyres!"

The doors swing open. The jukebox abruptly stops. Silence, apart from the clack of cleats on the sawdust-strewn wooden floor. A tall stranger strides to the counter, removes his Oakleys and wipes a beaded brow.

"What's a man gotta do to get a latté and a slice a carrot cake round here?"

"Just over from Elkton today, Ma'am. But I hail from a place they call Europe."

"Europe? Do they ride bikes in Europe sir?"

"They sure do. Gather round folks and let me tell you a story about a little hill I once climbed called the Mortirolo..." 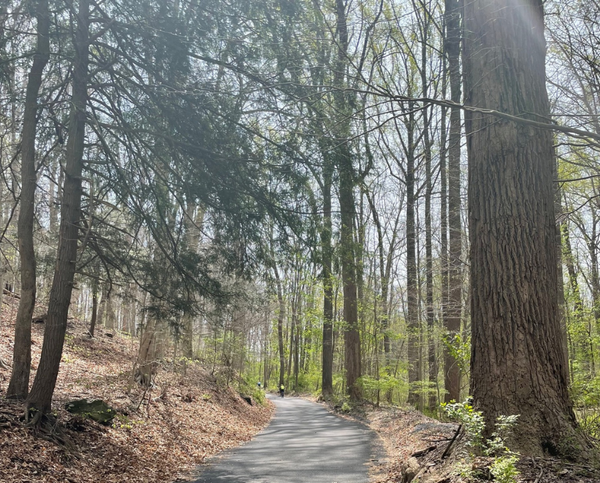 Watch out America, the Brits are back! Andy emigrates, buys a new bike, gets to grips with gravel, takes on his first US event and ... mmmm, donuts.